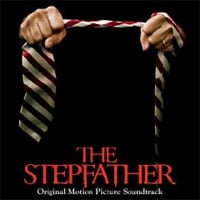 The Stepfather is the latest movie I haven’t seen and probably won’t be seeing anytime soon. The movie is a thriller and is about…a Stepfather? I guess a guy comes home from Military school and finds out that his mom banging some random guy. Turns out that guy is a killer and he gets help from his girlfriend and friends to take this guy down. ZZZZZZ.

The soundtrack features your standard radio rock stations bands, as well as some other metal and soft rock bands. Bands like: Mutemath, Sleep Detectives, Hoobastank, Ken Andrews, Blurtonia, Red Means Go, Seether and Filter. Considering I don’t like any of these bands, I didn’t really care for the soundtrack. Mutemath had a decent song on there; same with Filter. It’s not bad, just not my thing. I’m sure jocks and meatheads will dig this soundtrack.