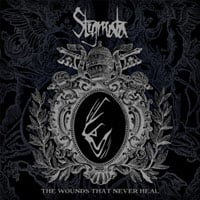 I Scream Records released Stigmata’s “The Wounds That Never Heal” back in June 2009. The band has stopped playing back in 2001 but have played reunion shows here and there. A lot of the members have gone on to play in bigger metal acts like Shadows Fall, Murders Row, and Crisis.

It’s been awhile since I listened to music from Stigmata. I wasn’t necessarily a fan of the band but I’ve heard of some songs before. At some point the band released an album on Victory Records. “The Wounds That Never Heal is two hard-to-find albums merged into one powerful album. It should make it easier for fans trying to find music from these guys.

The music of Stigmata should appeal to fans of Warzone, Terror, Hatebreed, Madball and other heavy hardcore & metal bands. Listening to this album really makes me appreciate older hardcore & metal like these guys. The production sounds fine to me, but some have complained that this wasn’t remastered at all. I don’t know, I think this sounds fine and adds to the fact that the band was an older HC band. It’s like listening to old school punk rock; some things shouldn’t be polished up. As I began to listen to Stigmata, I realized that I have heard more songs than I thought. The song that stands out from the rest is “Can’t Bring Me Down.” I enjoyed the songs in the second portion of the album, because it’s from the album I’ve heard before. But overall, this album proves how awesome Stigmata was. If you don’t have their releases, this would be your best option in hearing music from Stigmata.