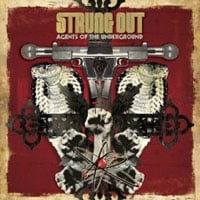 Strung Out has been around 20 years?! Who knew!? I know I didn’t. The band celebrates their 20th anniversary with their 7th full-length album on Fat Wreck Chords. The new album “Agents of The Underground” offers up their signature melodic punk rock/metal songs that the kiddies have been moshing to for 20 years.

It seems the only time I listen to Strung Out is either seeing them live or when it comes to reviewing their albums. It’s not a dig at the band; I just tend to not listen to them that much. I need to make a better effort of listening to their stuff. I mean, what’s not to like: Jason Cruz’s vocals are awesome, the songs are meaningful and melodic, and Strung Out is just an influential punk rock band. What is wrong with me!? A lot of bands today sound like Strung Out, but do a piss poor job at sounding this good.

“Black Crosses” is the first track on the album, and its okay, but I prefer their second song “Carcrashradio.” It’s more melodic and catchier, and my favorite song off this album. I noticed the lack of metal on “Agents of The Underground,” which I’m fine with. I like metal, but I prefer when Strung Out is playing melodic, fast punk rock. The title track “Agents of the Underground” stands out from the harmonized vocals from Jason. The album ends on an upbeat note “Andy Warhol,” which might be a good clue on where the band stands on their 20 years. The way it sounds in that song, they aren’t stopping anytime soon and going to keep on pressing on.