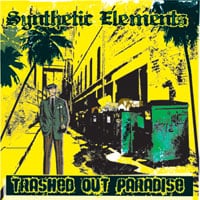 Colorado-based Synthetic Elements’ newest album “Trashed Out Paradise” contains 10 tracks of punk rock and ska songs that fans of NOFX, Goldfinger & Mad Caddies will dig. While I thought some songs were good, this album could have been better.

It’s tough to make out Synthetic Elements’ influences because they change styles every song. But to me it seems like the bands I mentioned above. The vocalist sometimes sounds like John Feldman (“Evelene”) and then sometimes he sounds like Fat Mike (“How Far”). “Evelene” is a cool track regardless if the vocalist sounds like John Feldman. Who doesn’t love a good old sea shanty? I particularly like the ska songs like “Dancin’ time” and the “Wooly Bully” cover. Seems like a lot of ska bands have covered “Wooly Bully.” Why the appeal? Surely there are other songs to cover that haven’t been covered by other bands. Synthetic Elements’ latest album has its moments but sometimes it’s annoying to me. It’s hard to describe why I didn’t like this album as much as I should. Check out the band’s MySpace page and listen for yourself, perhaps you’ll like them more than I did.