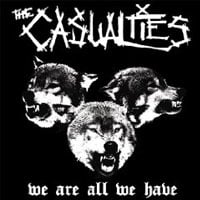 The latest album from The Casualties came out in August on Side One Dummy, and it happens to be their 8th studio album. Geez, the band has been around awhile. Time flies I guess. Every time I hear a new album from the NYC street punk band, I realize that I never listen to their music. Maybe I should start?

“Carry on the Flag” is a short punk rock track that usually starts off albums like this. Actually, it reminds me something Agnostic Front has done. The title track “We Are All We Have” is by far the best song on the album. It’s got lots of screaming, and “whoa-ohs” in there; which I like. Their sing-along style is still here but some songs sound like the Exploited. Just in your face, thrash punk. They also take a stab at reggae & dub with “In the Tombs” and their last track “Rockers Reggae (Working Man Dub).” Let’s just say they are better off playing the street punk. Sometimes mixing the genres makes the music clunky and that’s the case with those 2 tracks. Overall, the Casualties continue to make a name for themselves in the street punk genre and they won’t disappoint their fans.

Bottom Line: More of the same, but that’s not a bad thing
Notable Tracks: We Are All We Have, War is Business, Looking Through Bloodshot Eyes,
Overall Rating:

NYC punk, punk rock, Side One Dummy, street punk, The Casualties, We Are All We Have