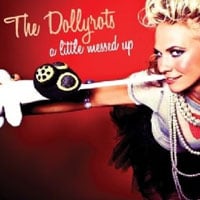 The third studio full-length album from this female-fronted pop punk band offers more of the same, which isn’t a bad thing if you like the Dollyrots.

I have a bad memory but I think I’ve reviewed previous stuff from the Dollyrots. They didn’t leave that big of an impression on me, but I didn’t outright hate them either. This isn’t bad but not something I normally like or listen to on a daily basis. The Dollyrots seem to have matured in their sound a little, but not necessarily their songwriting. Their music sounds like it would be perfect for some girly TV series like Gossip Girl. Upon further research, the band’s songs have been used in Sisterhood of the Traveling Pants 2, which makes total sense. They also guest starred in CSI: NY as an indie band, which doesn’t make sense.

Musically, the songs are peppy and fun, if you like hearing a girl sing about boys and all that crap.