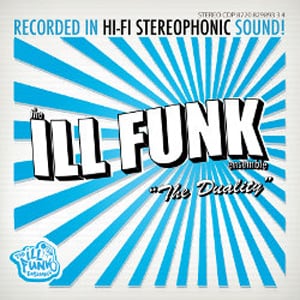 Representing Albany, NY the Ill Funk Ensemble produce the hip hop/R&B sound that I prefer to enjoy…live instruments, genre-bending styles and an album that manages to capture the energy of a live show.

Right off the bat the first track “She’s Fearless” caught my ear and sonically informed me that I was listening to something unique. The powerful bass groove grabbed me while the steady driving sound of the drums paved the way for an ambient sound that led to a very catch first track. The second song off of “The Duality” titled “Afraid of Heights” somewhat reminded me of a Public Enemy track from way back when, while “Bringin’ the Heat” samples the Sanford and Son theme for a fun and interesting DJ freestyle track.

Like the name of the album itself, it feels like “The Duality” suffers from a case of duality. While the first half is full of danceable funky track and the instruments are prevalent, the second half of the album seems full of synth parts and drum machines. The latter half feels more like your common nightclub album than the funky freshness of the first half.

While I am definitely not the resident hip hop expert on Readjunk…actually I’m far from it…I really enjoyed the first part of “The Duality”. I was reminded of the Roots in general and a few Outkast songs in particular like “Hey Ya” or “The Way You Move”. There was definitely a retro funk/soul sound to many of the songs. I wasn’t much of a fan of the rave songs or the slower hip hop songs though.

The Ill Funk Ensemble definitely had uniqueness about them and they sound like they would be an energetic and fun band to see live, but “The Duality”, depending on what song, really was hit or miss for me. They have the potential to push the boundaries of the genres that they are currently bending.

Bottom Line: “The Duality” is one part fresh sounding and another part canned hip hop that you would hear at any old nightclub.
Notable Tracks: She’s Fearless, Bringin’ the Heat, Interlude One
Overall Rating: