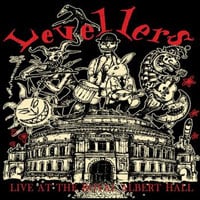 It’s no secret that the Levellers is my favorite band. While I can’t cross the pond to go see them perform all the time, the next best thing is either their live DVDs or CDs. In this case, Live at Royal Albert Hall is a brand new live album, recorded at the famous Royal Albert Hall in London. The album is available through the band’s fanclub, or you can purchase a download version at iTunes internationally (yes it’s available on US iTunes as well)!

The Levs broke up their set into 2 segments, first half would be all acoustic and then second half would be electric. I love when bands do this at shows because it’s different, and you get the best of both worlds. The Levellers are one of those bands that sound great playing both acoustic and electric. Besides having just the band perform, they also had a string quartet, grand piano and other classically trained musicians with them as well. Hey, it worked with Metallica; it can work for the Levellers. The Levellers aren’t back by this huge orchestra like Metallica but you get the idea. On the CD version, you get an extra 3 songs (“Edge of the World,” “Another Man’s Cause,” “Behold the Pale Rider,”). The story behind these recordings is that this album almost didn’t take place because the recordings were lost or damaged. Jon Sevink, the fiddle player of the Levellers somehow miraculously rescued these tracks. These 13 tracks are the only ones that they were able to rescue. It’s a bummer that we can’t hear all the songs that the Levs perform at Royal Albert Hall but I’ll take this over nothing any day!

The first track on the live album is “No Change,” which is one of my favorites off their first album “A Weapon Called the Word.” “Edge of the World” is from the Hello Pig album, and it’s a track that always stood out on previous live recordings from the band. “Before the End” is an amazing song off their newest album Letters from the Underground; wait ‘til you hear how it sounds live! I think the best track on the entire album by far is “Chemically Free.” This is the song that you can clearly hear the quartet, grand piano, etc. and the song is set up slightly different. Whatever they did, the song just sounds excellent! I’m glad they were able to rescue some of the new songs because I haven’t heard them live yet. “Behold the Pale Rider” took awhile to like on their new album, but it’s definitely grown on me since the album was released. The one thing that is lacking from this album is not knowing when the classical musicians are playing with the band. Sometimes you can notice it, sometimes you can’t. I wish I was there in London to see this concert because it sounded like it was a once in a lifetime performance!

Perhaps one day the Levellers will grace their presence in the United States and tour again. It’s only been 6+ years since they last played here! If New Model Army can tour here, I think you guys can too! But in the meantime, fans that haven’t seen the Levellers perform live at all or in awhile will just have to be happy with just their albums like this one. The CD version is obviously better because it contains more songs, but the 10 track download is great as well.

Bottom Line: I’d recommend signing up for the Levellers fanclub so you can get this CD for free! If not, the 10 track download from iTunes will do.
Notable Tracks: No Change, Edge of the World, Before The End, Chemically Free, Behold the Pale Rider, Exodus, This Garden
Overall Rating: