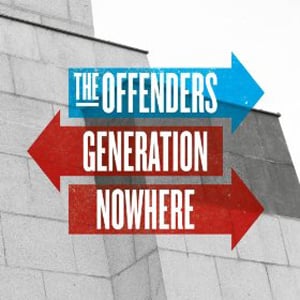 “Generation Nowhere” is the second solid release in a row that I’ve managed to get my hands on and it doesn’t disappoint.

There is a unique sound to these German rudies that starts with the raspy vocals and moves to the guitar sound and beyond. You can label them ska punk but I wouldn’t categorize them as anything you would have heard from the third wave revival. It’s more of a mix of rock and roll, oi and two tone. One could say that they sound like the Clash if the Clash started playing ska punk.

On the Offenders last release “Lucky Enough To Live” there was more of an overall rock sound to the album. There were still plenty of ska and punk tracks, but the overall vibe had that rock feel to it. “Generation Nowhere” on the other hand focuses more on the danceable, fast side of their ska influences. The Offenders keep things interesting and there’s a lot of variety to their sound. They jump from a hyper fast ska sound, mix in some 50’s rock and roll and slow things down with some reggae…sometimes in the same song. There will also be the occasional Hammond organ sprinkled into some tracks.

There are plenty of reasons that I’ve become a fan of the Offenders. Not only does their music have a unique sound and flavor all of its own in the ska community, but their songs have a positive social message while still having some fun. There are some insightful thought-provoking tracks on “Generation Nowhere”, title track included. Songs like the opening track “Berlin Will Resist” and tracks such as “Heil Angela” and “The Youth Paid” speak of the fight against the powers that be as well as some insight into the here and now of the youth of Germany today.

The Offenders continue to release quality tracks on an album that will surely see heavy rotation on my media players. There are some suburb, well-written tracks on “Generation Nowhere” and these German rude boys will have you skankin’ in no time.

Bottom Line: Ska, punk and rock and roll from Germany. Guitar-driven ska that sounds similar to Snuff and Assorted Jellybeans.
Notable Tracks: We Will Always Be With You, Rude Fans, Generation Nowhere, Heil Angela
Overall Rating: