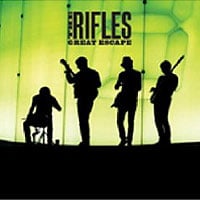 A day doesn’t go by without putting on the Rifles’ new album “Great Escape” or their first album “No Love Lost.” The album hasn’t been released in the USA yet but when it does, I wouldn’t be surprised if these guys become huge! And even if they don’t get big, at least I found a great new band!

Great Escape is the second album by the UK band and it’s a flawless 11 track album. There’s not one bad song on here, which is very rare with most albums. Their music is a mixture of British mod rock, indie rock, garage and alternative. Think The Jam meets Oasis meets Kaiser Chiefs, but with a rebellious punk attitude. The album starts off with a blast of rock with “Science in Violence” but it’s not until the title track “Great Escape” that you realize what this band is capable of. As soon as I heard that *boom boom boom* from the opening of the song, I knew this was going to be my favorite track on the album. Just everything from the keyboards to the subtle handclaps in the song makes this a gem.

Each song is filled with catchy choruses and melodies that will make you hum for hours. Even the more low key songs are worth listening to. “In The Meantime” is the last song on the album and it shows the range the band has. The Rifles aren’t some generic UK guitar rock band like others have claimed. Maybe it’s time for those music critics to get out of the UK for awhile and appreciate what they have in terms of music? Right now in America, the music (for the most part) is shit so be thankful of what you got Brits!

If you like British rock music, The Rifles shouldn’t be overlooked. If you can manage to get their album be sure to do so. You’ll thank me later.

Bottom Line: One of the best albums I’ve heard in the last 5 years.
Notable Tracks: Great Escape, Fall to Sorrow, Sometimes, Winter Call, Romeo and Julie, The General, In The Meantime
Overall Rating: