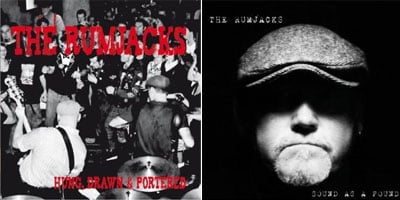 St Patrick’s Day has passed this year but that doesn’t mean you can’t listen to some Celtic rock music still! The Rumjacks hail from Australia, but they don’t sound like it at all. The band is heavily influenced by The Pogues and Roaring Jack (obviously). Members of the band formed in 2008 when their other bands (the Laundrymen, Catgut Mary) broke up. I’ve heard many a Celtic rock band in my day, and these guys definitely stand out from the bunch.

I’m reviewing both their releases since each EP only contains 5 or 6 tracks each. Their newest release is “Hung, Drawn and Portered” and it’s a fine EP. It makes me want to hear more after hearing it. The first song on that album is “The Plantin’ O’ Kitty Randall” is an awesome track that sounds like a bunch of pirates are singing it. I notice that many bands cross over into the pirate territory when doing Celtic music sometimes. I don’t mind it, pirates rock! The accordion playing is top notch, and the singing is really good as well. The last track on the EP is a cover of “I’ll Tell Me Ma” and I can never get enough of hearing different covers of that traditional song.

The other album is called “Sound as a Pound” and it’s just as good as other EP. If these albums were re-released in the States (I Think they were), it probably would have made sense to merge the 2 albums together. The highlights from this EP include “Shadrach Hannigan,” “My Time Again” and the cover of trad song “Marie’s Wedding.”

The albums are available through iTunes or Amazon. Check these guys out, and maybe one day they will tour the United States? I’m looking forward to hearing more from The Rumjacks.