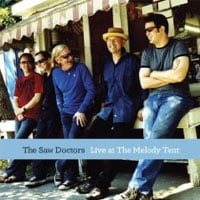 The Saw Doctors are one of the best live bands I’ve ever seen. They are fun, energetic, and have a great stage presence. If you go to a Saw Doctors concert, you’re not leaving the show disappointed. Their latest album is a live album from The Melody Tent, which is located in Hyannis in Cape Cod. Every tour, The Saw Doctors plays this venue and the crowd is always enthusiastic for them. The band decided to record a live CD & DVD, and this is the result.

The Saw Doctors have had a few live albums released, different set lists of course. This time around we get great songs like “Macnas Parade,” “Galway and Mayo (including Maroon and White),” “Will it Ever Stop Raining,” and of course “N17.” I liked that they included the ska-ish song “Will It Ever Stop Raining,” because it shows the different styles that the band can play. “This Is Me” is a surprising song to see on the CD because out of the 4 times I’ve seen the band, I don’t recall them ever playing that one. The live audio could be better in spots but overall, the sound is impressive. From listening to the album, you can get a sense how great the band is live. The band hasn’t recorded anything new lately besides “Bebo” and the Irish chart topper cover of the Sugarbabes’ “About You Now.” By the way, check out that single for “About You Now” because it’s an awesome cover! Very rockin’ indeed! But even with those 2 songs, the band resurrects songs fans haven’t heard in years. I think that’s great because you won’t just hear the classics at their shows.

Live at the Melody Tent is a worthy purchase if you’re a fan of the band. I’d also recommend buying the documentary DVD “Clare Island to Cape Cod” and their single disc “About You now.” That disc contains songs of “Bebo,” “She’s Got It” and a video of “I Useta Lover.”

Bottom Line: Great live album that makes you want to go out and see the band right away.
Notable Tracks: Macnas Parade, Will it Ever Stop Raining, This is Me, Clare Island, N17, that’s what She Said Last Night
Overall Rating: