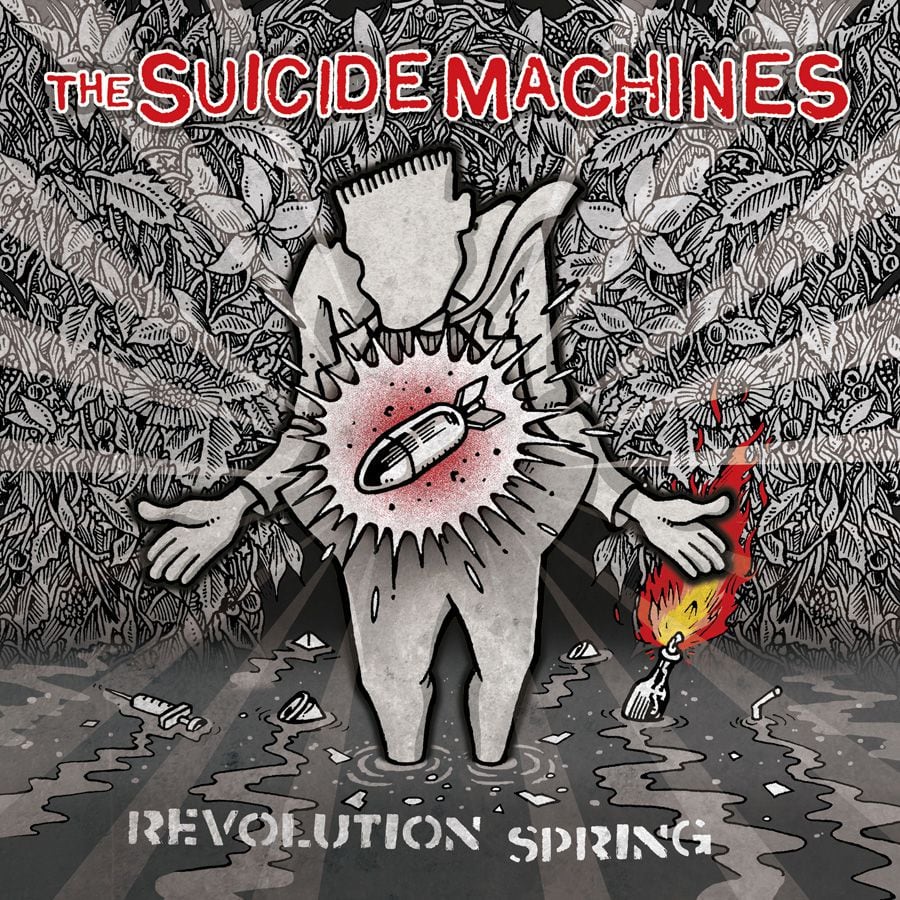 “Revolution Spring” is the Suicide Machines 7th studio album and their first full-length release in 15 years. With “Revolution Spring” the band finds themselves refreshing their early ska punk sound. You can almost call this album a direct sequel to “Battle Hymns”.

While the early days of the Suicide Machines were seeped in third wave ska punk, after “Battle Hymns” the band experimented with a sound of varying degrees. There was an underrated pop punk album, some hard rock and hardcore as well as some Operation Ivy-influenced ska-tinged punk rock. Their sound was evolving as was the world around them. Their socially conscious lyrics began to focus on the ever-changing politics of the world around them. They rocked against Bush and told big corporations to fuck off while letting everyone know that punk and also ska music can be a vessel for political messages…believe it or not!

On “Revolution Spring” the band takes the social and political messages that haunt their thoughts and once again put them to a ska/punk soundtrack. I mentioned the album as “Battle Hymns” 2.0, and that’s not a slight to their later releases but “Destruction By Definition” and “Battle Hymns” have always been my favorite Suicide Machines sound and it was exciting and unexpected to find the band going back to their earlier ska punk roots. “Bully In Blue”, “Detroit Is The New Miami” and “Flint Hostage Crisis” keep you warned of the political happenings around the world while songs like “Impossible Possibilities” and the closer “Cheers To Ya”…a Less Than Jake-style ska punk romper…shine a light of positivity and hope to the album.

“Battle Hymns” also found the band coming to their own in regards to their social and political songwriting which they’ve perfected over the last two decades. That spills over onto “Revolution Spring” but instead of the formula on their last two studio albums of what felt like a hard split in sounds…a handful of hardcore songs, ska song, more hardcore songs, ska song…everything flows more naturally. The songs on “Revolution Spring” are unpredictable in regards to sound. What starts off as a hardcore punk song bounces around between ska, punk, reggae and whatever they want it to sound like…much like their earlier albums.

It’s no longer 1997, the world is a much darker place now than it used to be and the release of “Revolution Spring” couldn’t have been timed more perfectly. The band makes you think, makes you reflect inward but also reminds you that it’s ok to have fun and enjoy life whenever you can. To quote the song “Simple”…”Don’t ever be afraid, and don’t let it be too late. It’s never as bad as you think. The sun still shines on a new morning.”.

Bottom Line: “Revolution Spring” is like hanging out with your old friend from high school…things are both familiar and comforting but you know that things have changed and you’ve both become wiser and more in tune with the world around you. The album dips into the bands’ past but adds their experience and experiences in life to the mix for one of the best albums of their career.
Notable Tracks: Simple, Cheers To Ya, Bully In Blue, Impossible Possibilities, Well Whiskey Wishes
Overall Rating: