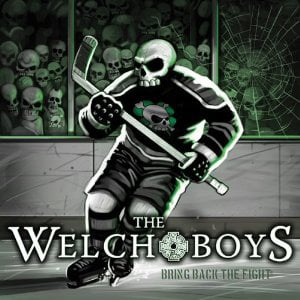 The Welch Boys are just about ready to celebrate the release of their third album “Bring Back The Fight” and considering that they’re from Boston, I’m going to go out on a limb and say that it will be a rowdy celebration.

“Bring Back The Fight” is actually the first time that I’ve ever listened to the Welch Boys and I wonder how the hell they flew under my radar. I have most definitely been missing out on some kick ass Boston street punk. The Welch Boys have that hardcore Boston sound which is about as gravely as a grave and ten times as fearsome. Their sound is notably influenced by the early Oi sounds of the Dropkick Murphys and Cock Sparrer as well as the hardcore sounds of SSD and Slapshot.

“Bring Back The Fight” is basically a mosh pit sonically transmitted to our ears. Everything about it screams old school. You get gang vocals, blazing guitar parts, a hard and fast rhythm section, raspy lead vocal and blue collar songs about drinking, fighting, loving, hating and life in general. While some of the songs get lost in the shuffle, some of the standout tracks in my opinion were “Bring Back The Fight”, “Belly Of The Beast” and “Sudden Death”. Those tracks showcased more than your average punk/oi song and allowed the entire band to shine.

While there were some repetitious sounding songs on “Bring Back The Fight”, overall they were still much better than a lot of crap that tries to pretend that it’s hardcore nowadays. It’s not an album that you’ll want to listen to while sitting down. Strap those boot laces up and invite some friends over for a riot-ous good time. It deserves nothing less.

Bottom Line: One of the best straight up street punk/oi albums I’ve heard in quite some time. “Bring Back The Fight” will definitely get your adrenaline pumping.
Notable Tracks: Bring Back The Fight, Belly Of The Beast, Sudden Death, I Feel Like Drinkin’
Overall Rating: