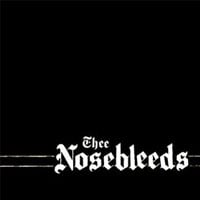 Thee Nosebleeds (not The Nosebleeds) hail from Philly and have a raw, punk rock and roll sound that’s similar to G.G. Allin, Motorhead and bands you might hear on TKO Records.

While many people might like this, I tend not to like this style of rock because it just sounds like a biker bar band. I’m not saying that’s a bad thing, but it’s my style. Thee Nosebleeds have that raw sound: rough whiskey drinking vocals, aggressive twangy guitars, and songs about drinking, drugs, violence…crap like that. So it’s time to grab your beer bottles, get on your bike and time to start throwing some bottles at people! RAR!! Musically and lyrically, things could be better.