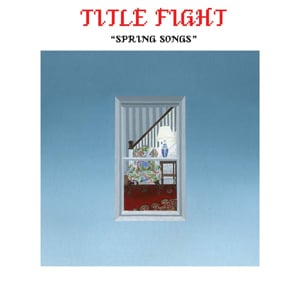 “Spring Songs” is a four song EP release as a follow up to Title Fight’s previous full-length “Floral Green”.

Title Fight decided to do something different with the recording of this EP and decided to record it direct from analog to tape. While that gives it a meaty sound reminiscent of early Nirvana demos, I think that it just sounds dated and way too fuzzy and distorted compared to other indie releases. Personally, I was never a fan of this sound which was found particularly on every punk album released from 1982-1991…when bands had to record in bathrooms and basements. I think that it takes away from how good a band can truly sound even without the layers of polish that digital recording and sound programs can provide.

Bottom Line: While “Spring Songs” suffers from outdated recording syndrome, the four songs on the EP are a pretty good start towards Title Fight’s next full-length.
Notable Tracks: Be A Toy, Receiving Line
Overall Rating: