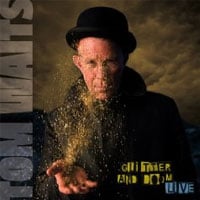 Seeing a Tom Waits live show is like watching a rare comet, you’ll be lucky enough to see it once during your life time. In 2008, Tom Waits picked out a bunch of US & Europe cities he hasn’t played in before, or in a long time. The tour was very successful, so it was only a matter of time that Anti Records would release a live album by Waits.

I never saw Tom Waits perform before but I was pretty close to buying a plane ticket to either Atlanta or Columbus to see him play. I’m sure most fans were annoyed that Tom Waits wasn’t coming to their city (myself included). Sometimes you just have to get a ticket and make an extended weekend out of it. Unfortunately I wasn’t able to go, but I swore the next time he announced a tour that I would go wherever he was playing. His live shows are legendary and very rare. In the end, I think it would be worth it. Now just have to wait ‘til he announces another tour.

The first disc is 17 tracks of live tracks, made to sound like one continuous concert. The songs were taken from the shows in Atlanta, Edinburgh, Dublin, Jacksonville, Tulsa, Milan, Knoxville and Paris. The second disc is filled with Tom Waits “tales” or stories that he tells in-between songs, or while playing the piano. Before the album was released, Anti offered up free tracks from the live album. Nice move on their part, because it’s always nice to hear something before you get it. The first song on the album is actually 2 songs “Lucinda” and “Ain’t Goin’ Down to the Well” from the Orphans album. It’s a nice way kick things off. I particularly loved that they included “Singapore” on this album, considering it’s one of my favorites from Waits.

Most of the tracks that are featured here are from his more recent albums, mostly albums from Anti Records. While some songs I don’t care for on the studio albums, it’s different when they are played live. Waits changes a lot of the tempos and styles up to the songs and makes them sound new & fresh. One of the songs that stands out the most, is “Going Out West.” The crowd especially loved the part when he said “I look good without a shirt.” I just love the beat in that song. Towards the end of the first disc, the album featured slower tracks like “I’ll Shoot the Moon,” “Green Grass” and “Lucky Day.” I actually never heard the track “Lucky Day” before but I absolutely loved it.

What I love about Tom Waits’ live presence is his humor and stories. In Columbus, he said he bought on eBay, the last dying breathe Henry Ford. First edition. That’s just something you don’t normally hear at a concert. Waits is just as good a comedian as a musician. And well, some say an actor as well. You’ll soon be able to see him star as The Devil in Terry Gilliam’s latest movie “The Imaginarium of Doctor Parnassus.” There are lots of rumors out there now that he might star in The Hobbit. He’d be perfect for the voice of Smaug the Dragon I think. Hopefully he’ll be in the movie, and then maybe he can do a song for the movie? But anyway, the whole second disc is a half hour of stories, jokes, weird anecdotes, and other random things that pop into Tom Waits’ head. There’s too much stuff in there to actually repeat it, and it’s better to hear it straight from Tom himself than have me butcher his lines.

All Tom Waits fans should definitely get this album because it’s got a great collection of songs, and funny stories as well. If you couldn’t see Tom live during this tour, this is the next best thing!

Bottom Line: Tom Waits is brilliant. This album is just another example of that!
Notable Tracks: Lucinda / Ain’t Goin’ Down to the Well, Singapore, Fannin Street, Going Out West, Make It Rain, Lucky Day
Overall Rating: