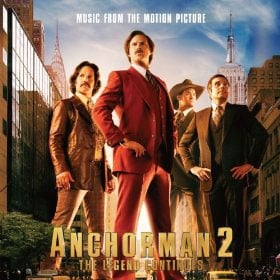 I was really anticipating Anchorman 2 and while I laughed during the movie, it just wasn’t good. I was just disappointed with it bigtime. I guess that’s why it took so long to make a sequel, because the first movie would be hard to top. I’m hoping some fine-tuning and editing will make it a much better movie when it comes to video.

Some of the bands/artists featured on the soundtrack include: Christopher Cross, John Waite, Hot Chocolate, Neil Diamond, Kenny Loggins and Grandmaster Flash. Gee, which artist stands out from the rest? Oh that’s right, Grandmaster Flash isn’t pussy soft rock. The entire soundtrack is late 70s/80s soft rock and it feels like they just picked the worst music of that era for the movie. I just think Will Ferrell and Adam Mckay really dropped the ball on this movie and soundtrack. I’m a big fan of Anchorman and usually Will Ferrell, but this sequel stunk on all levels.