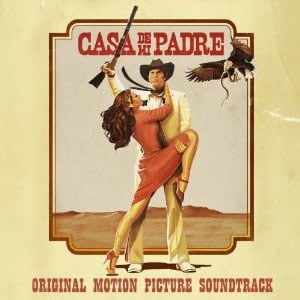 Casa De Mi Padre is the latest Will Ferrell comedy, but this time the whole movie is in Spanish! Will Ferrell speaking Spanish might not be funny to some, but I think this will be funny. Well let’s hope it’s not like Talladega Nights. I hated that movie.


The soundtrack for the comedy features music from the movie, as well some score tracks by Andrew Feltenstein & John Nau. The opening title track is sung by Christina Aguilera and is sort of a mixture of a James Bond theme and Spanish Western theme song. The score is much of the same, flaring trumpets, funky keyboards and acoustic guitar playing. Just think of something Quentin Tarantino would steal for one of his own movies and that’s how the score sounds. The standout score track is “Luv Butts,” but that track is more of a 70’s porn track than a Spanish western track. I liked the score tracks because I enjoy many Western scores. This is one of the better comedy soundtracks to have come out in awhile. I think once I see the movie, I’ll enjoy the tracks even more….or maybe not, who knows.

El Puma do a cool cover of “A Whiter Shade of Pale,” which I actually enjoyed. Not surprisingly, Will Ferrell’s lends his vocals to a few tracks including “Fight for Love” and “Yo No Se.” Will Ferrell singing aside, the songs aren’t bad and it didn’t make want to turn it off. For the most part this is a score album, but features a few songs from the movie ( I assume). This is worth checking out, just to hear Will Ferrell sing in Spanish.