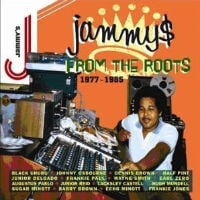 King Jammy, as many know him, is a Jamaican Engineer and Producer who has worked with some classic Reggae Artists, and has helped produced many records in his career, and continues to do so today. A disc two retrospective of Jammy’s earlier years including over 30 tracks of Reggae and Dub from many of Jamaica’s finest.

Disc 1 focuses more on King Jammy’s work with Dub artists, and Disc 2 is his work with Roots Reggae Artists. Some of the artists you will find on this 2 disc collection is Black Uhuru, whom Jammy produced their first record back in ’77, as well as Johnny Osbourne, The Jays, Frankie Jones, and Frankie Paul. Jammy got his start working with King Tubby’s production team after another member left the studio. Jammy and Tubby worked alongside each other and developed a strong report. After several years dealing with mostly Dub records, Jammy went on to produce his own albums. Listening to both discs, I prefer the music that is featured on Disc 2, which is more Roots Rock Reggae as it is more my pace. I am not the biggest fan of Dub music because it is a lot of instrumental work, but both discs are enjoyable to listen and any fan of old school reggae will want this one.