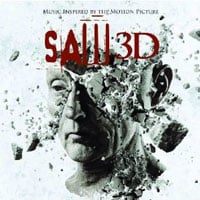 Talk about beating a dead horse to a pulp. How many of these stupid movies are they going to be made? Well I guess when the stupid public stops paying money to see the Saw movies every Halloween, then they will stop making them. Saw 3D is the 100th movie in the series, starring the great great great grandkids of the original actors. No I’m kidding but obviously it could get to that point if people stop seeing this shit.

This soundtrack is either going to attract metal & hard rock fans or kids who like to wear all black and sit in their rooms and cut themselves. Or maybe both, I don’t know. Some of the bands featured on the soundtrack include: Saving Abel, Hinder, Nitzer Ebb, Kopek, Saliva, Krokus, Lordi, Dir En Grey and other metal & hard rock bands. I don’t know if any of this music is in the movie or not; I’m sure some of it is. If you like this sort of stuff, this might be a cool compilation to own but I couldn’t wait to turn this off.