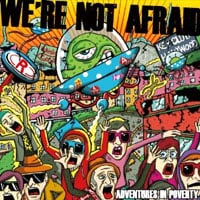 You don’t know how refreshing it is to hear some great pop punk music when reviewing CDs nowadays. It used to be the norm and it’s not anymore. I have a feeling We’re Not Afraid would have stood out from the bunch anyway because they have some catchy tunes!


“Back to Life” is the first song and probably the best song track as well. It’s got a catchy chorus, and will make you want to finger point and sing along at their shows. Most of their songs are fast and just as good as the first track though. I didn’t feel the need to throw this CD out the window and hoping a bus run the CD over. The vocals aren’t irritating, sometimes they can be a tad whiny but which punk rock band vocalist isn’t these days. If I had to compare these guys to any bands, it would be Strung Out, Authority Zero, and Unwritten Law. Fans interested in those bands will like We’re Not Afraid. Give it a listen ya punk!