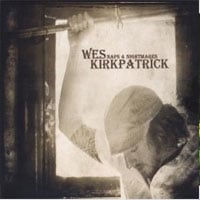 Singer-songwriter types are hit or miss with me. It depends on the style of their music, their singing voice, their personality and a few other factors. I think Colorado’s Wes Kirkpatrick has the voice and style to keep me interested.

Wes sort of has a country western flair to his vocals, but the music is more like folk rock, acoustic rock and a bit of blues. I believe this is Wes Kirkpatrick’s debut solo album, but he was playing with his brother in the band The Kirkpatrick Project. If I had to pick which tracks I liked the best, it would have to be “Superstition” and “Chicago.” I think I prefer “Chicago” but both have that folkie sound that I like from singer/songwriters. Naps & Nightmares isn’t a super flashy album, but it’s something nice to leave on in the background while you’re mellowing out. That’s not a dig or anything, but just the type of album it is.

Bottom Line: A singer/songwriter worth listening to
Notable Tracks: Superstition, Away With You, Chicago
Overall Rating: