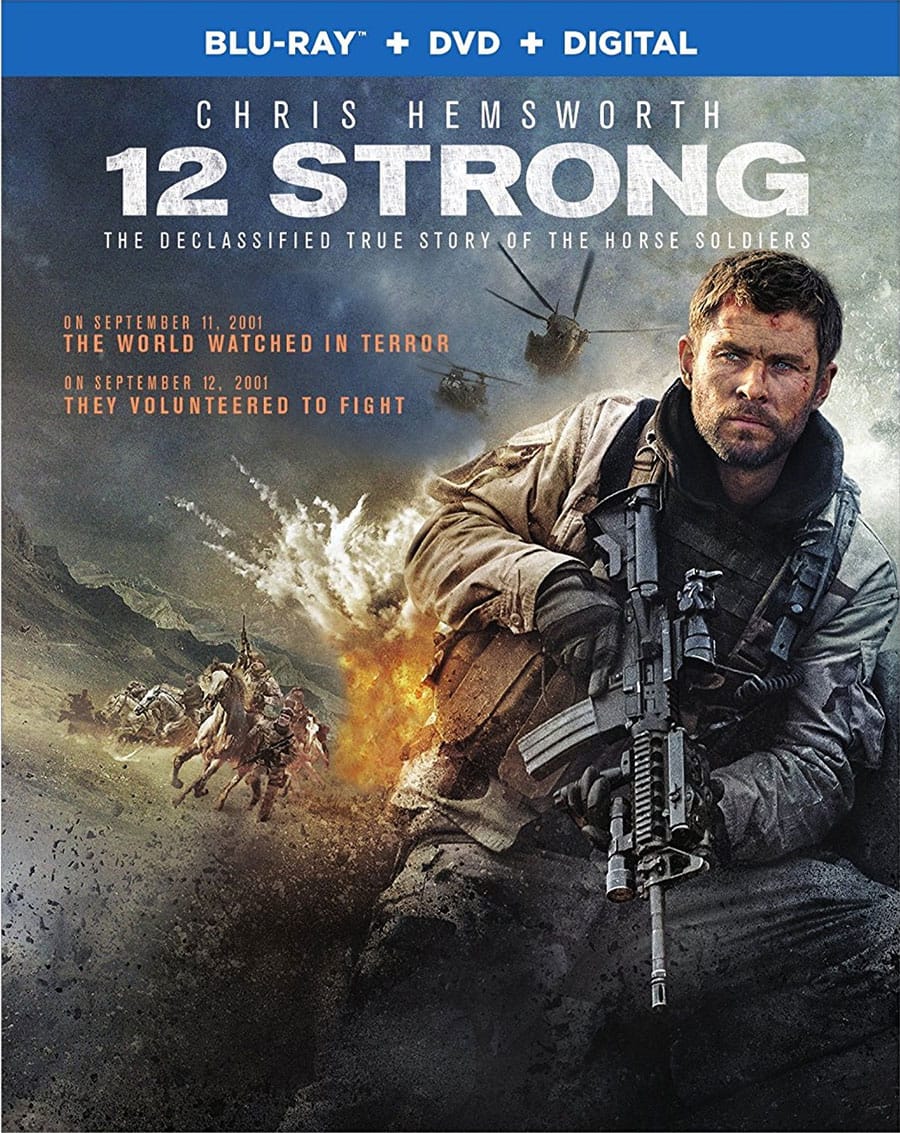 12 Strong is the latest Bruckheimer produced war flick and does the job well. The movie succeeds in that tells the true story of these “horse soldiers” right after 9/11 and it’s pretty intense. 12 Strong has some of the typical war movie cliches and some other flaws but for the most part, it’s a decent war film.

After 9/11, a U.S. Special Forces team goes to Afghanistan to take on the Taliban and Al Qaeda. The team is lead by Captain Mitch Nelson (Chris Hemsworth), who volunteers to lead the team after witnessing 9/11 from his home. CWO5 Spencer (Shannon) was set to retire but goes back into combat to serve. They link up with General Dostum (Navid Negahban) and the Northern Alliance and try to convince them of fighting alongside them since they have a common enemy. The team must adapt to the rough terrain and take out the Taliban and Al Qaeda, even though they are vastly outnumbered and outgunned.

This is a declassified story and one I didn’t know about. I’ve always been curious to see what kind of movies will be coming out of the ongoing war in the Middle East. There’s a lot we never know about, until someone either writes a book, develops a movie or something is declassified. It was interesting to see the soldiers adapt to riding on horseback, when most of them haven’t except Captain Nelson. Having the story be based on a true story also made watching it felt more important.

The movie is lacking in the character development area in that we only get to know the men briefly. Besides Hemsworth, Shannon and Peña, the rest of the crew is blur to me. And those 3 weren’t that developed either. You get just a enough to care if they die or not though. There were some war cliches in there like someone getting injured and everything is happening slow motion around them. It’s just minor nitpicks. The overall story felt like a needle in the haystack though. They completed their mission but at the same time, feel like they barely made a dent into things. Won the battle but didn’t win the war. Most war movies focus on the overall war and not necessarily the individual battles. I suppose the focus is on the soldiers fighting though. The action is stellar and intense and I thought this was very similar to Black Hawk Down a little. Little did I know this was produced by Bruckheimer as well.

There are two featurettes on the Blu-Ray. There’s a behind the scenes featurette that is 20 minutes long or so. They show filming on location, the actors getting pre-shooting gun training and horse training and lots of interviews with the crew and real life soldiers this was based on. The other featurette was about the sculptor behind the America’s Response monument down at the 9/11 memorial. I’ve walked right by this monument when going in and out of WTC and didn’t know what it is. Granted, it was behind a fence and guarded when I did notice it. I’m glad I know the story behind it and more importantly, the reason it was made. I also liked the featurette, just seeing how the monument was made.

12 Strong is a good war film but suffers in that you don’t really get much time to get to know the soldiers. Even after watching it, I still felt like, what exactly did they achieve? They won a town. It’s such a small blimp on a very large scale of this ongoing war that feels like it’s never going to end. I’m all for supporting the soldiers and watching these types of movies, but at the same time, I feel like we shouldn’t have even been over in Afghanistan to begin with.