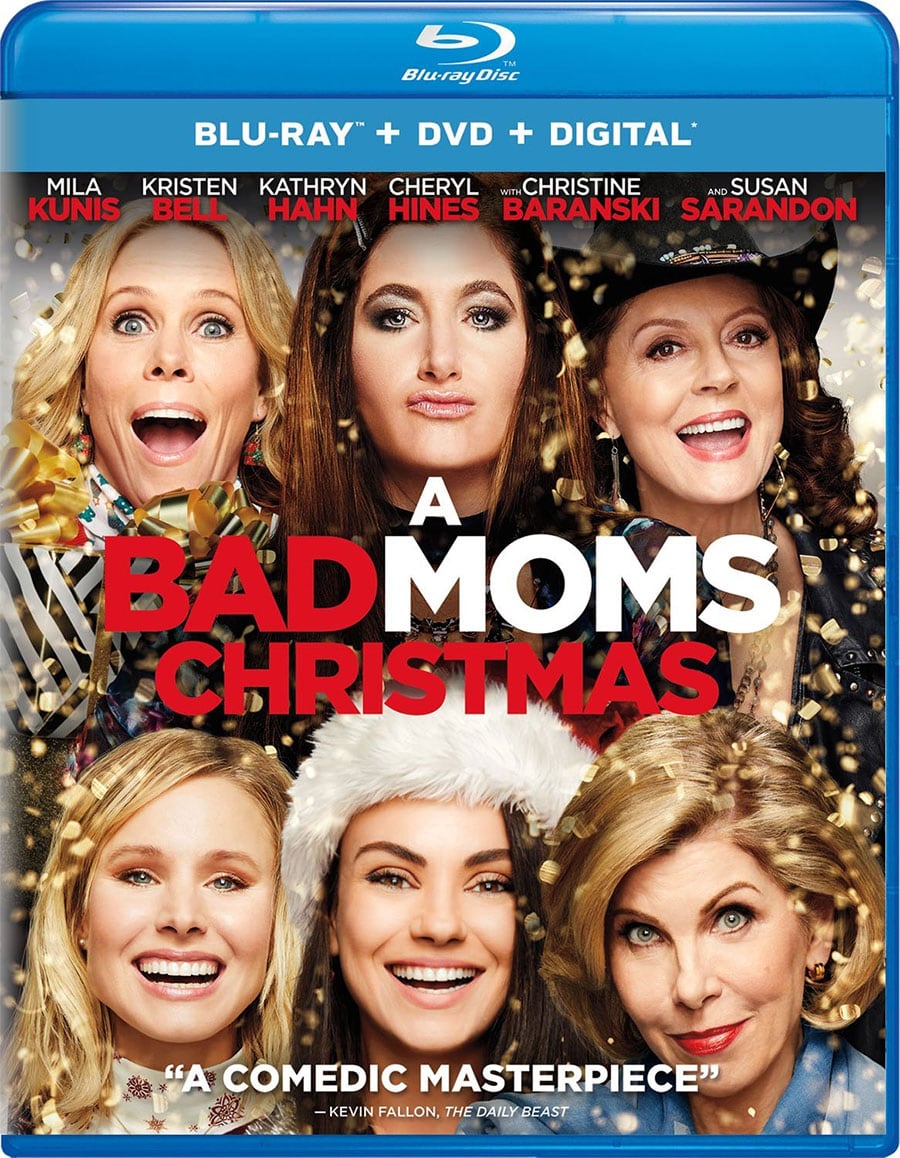 The sequel to the funny Bad Moms is A Bad Moms Christmas, which has it’s funny moments but not as good as the first movie. If you’re in the mood to watch a Christmas movie in February, then you can do that right now!

Just like the first movie, it follows the lives of 3 moms. Amy (Mila Kunis) just wants a simple Christmas with her boyfriend Jesse (Jay Hernandez) but that plan blows up in her face when her Mom, Ruth (Christine Baranski), shows up. The same thing happens for Amy’s friends, Kiki (Kristen Bell) and Carla (Kathryn Hahn). Kiki’s mom, Sandy (Cheryl Hines), is overbearing and smothering. Carla’s Mom, Isis (Susan Sarandon), shows up and just as crazy as Carla. Things quickly derail for everybody’s plan and having to make not only their family happy during the holidays, but make their mothers extra happy as well.

I really enjoyed Bad Moms and thought it was funny, entertaining movie about being a mother but overall, a parent. A Bad Moms Christmas is definitely funny but nowhere near the quality as the first one. There’s a lot of silly scenarios like sexy santa competition thing with Carla’s soon-to-be boyfriend and then going crazy in a mall. Can you really drink beers in the food court of a mall? What I liked about Bad Moms was all the stuff that rang true with being a parent, but this one just goes beyond far fetched in some scenarios. Sure, there’s thing there that mothers can relate to like their complex relationships with their own mothers. I did crack up at Christine Baranski’s lines, who seemed like she was playing Leonard’s mom from Big Bang Theory. Cheryl Hines clingy Mom was really funny and creepy, especially when she’s caught watching her daughter start to have sex with her husband.

While I liked the movie, it just felt off like most comedy sequels do. It was funny but could have been so much better and different. If I was going to do a Bad Moms Christmas movie, I would have gotten Christina Applegate back for more than a cameo for starters. I would have explored the craziness of trying to get kids, your other family, teachers, principles Xmas presents, the traffic that Christmas brings, and even stuff with the school itself. I’m sure they could have made a joke about the endless Xmas cards people get as well. All that stuff is freakin hectic during the holidays and it just wasn’t talked about enough. I did like that the sequel was a Christmas movie instead of just a sequel with more stuff that happened in the first movie. I kind of wish the studio held off releasing this video release until November. I don’t like having to review Xmas movies after the holidays, but I did want to see the movie so I sucked it up. I just think they would make more money during initial release if they released around the holidays.

The Blu-Ray has a gag reel, additional scenes, crew music video and some trailers. The gag reel was pretty funny and knew there would be one on here since you can tell they had a lot of fun making this. The same goes with the additional scenes, which is just them doing different lines. I enjoyed that just as much as the gag reel. There’s a digital HD code but anybody hoping to use it other than iTunes will be disappointed. You can only redeem iTunes because STX has the digital rights apparently. It really annoys me that with something like Movies Anywhere and you still can’t get every movie in one location. Maybe STX will allow redeemed movies in iTunes to port over to Movies Anywhere and Vudu in the future?

A Bad Moms Christmas doesn’t really offer anything new and not a Christmas I will put frequently into my Christmas movie rotation when the time comes to start watching those movies. It still is a very funny movie with some good scenes but it still could have been a lot better.