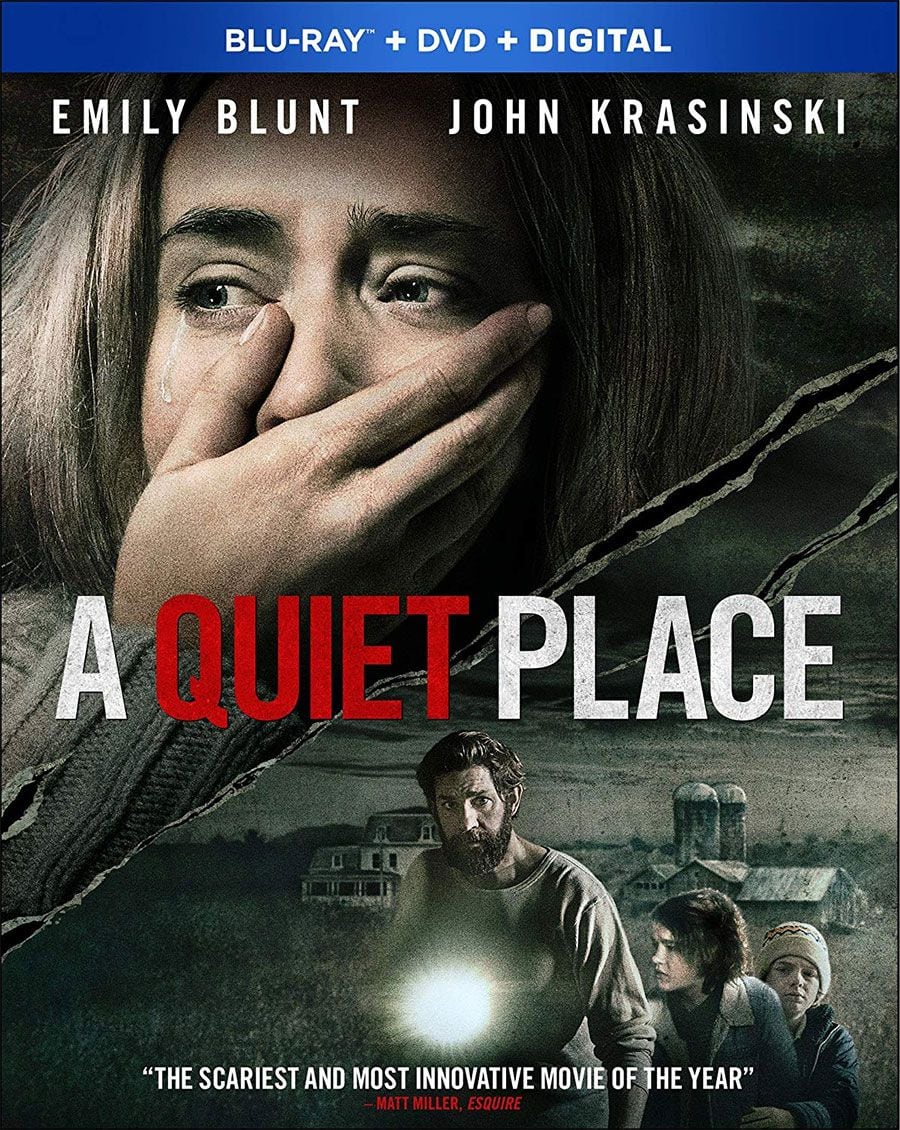 I really had no desire to see this in theaters but glad I was able to check it out at home…during the day. The movie is shot really well, it’s intense, and it’s actually a horror/thriller where you’re rooting for the characters to survive.

In a matter of a few months in the year 2020, the Earth’s population is nearly wiped out by hypersensitive hearing alien creatures. Even just a quick noise or one word can trigger the aliens to come for you and you’re killed instantly. I’d be killed pretty quick just because I wouldn’t be able to hold in a fart. The movie follows around the Abbott family: Lee (John Krasinski), Evelyn (Emily Blunt), their deaf daughter Regan (Millicent Simmonds) and their sons Marcus (Noah Jupe) and Beau (Cade Woodward). They are just trying to get by, without making any noises, when something really bad happens to the family while out scavenging. A year later, Evelyn is in the final stages of her pregnancy (a new kid in this world, are you fucking kidding me?!), and Lee is trying to find ways of defeating the creatures and making contact with the outside world. The Abbotts try desperately to protect their children and find a way to fight back.

I didn’t know what to expect with A Quiet Place. It got a lot of great reviews from critics and fans of thriller or horror movies. Like Get Out or IT, I wouldn’t really call this straight up horror because it’s not gory in any way. I can’t take those kind of horror or thrillers. When a movie starts getting so gross and gory, I want no part of it. This felt more like a drama with scary shit in it. It reminded me of Signs in that they didn’t always show the aliens and used a lot of sounds to scare you. There were some jump scares but they were done right and not over the top. I joked on social media that the movie needed more dialogue but honestly, it works really well without that much spoken dialogue. They use sign language most of the movie and it’s done in a way that you don’t really need too much dialogue. There are moments when something is spoken and it packs a punch when it happens. The opening few minutes was rough to see, and reminded me of the opening scene of It. You know it’s coming but you just don’t want it to happen.

What I like about A Quiet Place is that you cared about the characters. Unlike other so-called horror movies, you usually want to the people to die immediately just because they are so stupid. The movie had some sweet moments like Lee and Evelyn sharing an iPod or whatever and listening to Neil Young’s “Harvest Moon” and slow dancing to it. It’s one of those moments when there’s not much sound and then that comes on, it makes the song certainly stand out. When people would scream out for certain scenes, it really made you aware of the sound and make your hairs stand out.

I thought both John Krasinski and Emily Blunt were excellent. He’s not saying much but you can see it in his eyes when something is sad, or bad or scary. The scene with Emily with the nail on the stairs was perhaps, the most squirmish scene in the entire movie. Something that didn’t even involve the alien creatures. By the way, did they really borrow a scene from Home Alone? The other great scene that she was in was when she was trying to avoid the alien in the house while giving birth. Man, that was intense to see. The kids did a great job too. I’m happy the majority of child actors now are good and not crappy like they used to be in the past. It could ruin a movie if they are terrible so thankfully that wasn’t the case this time. I didn’t really like the opening scene for obvious reasons, I’m a father and hate to see stuff like that happen. It opens the movie up really well but man, that was sad. I also had a love/hate feeling towards the ending. Just when we thought were going to see some monsters getting blown up a lot, they cut to black. I’m sure there will be endless sequels now, which I hope doesn’t cheapen this movie. I just wish we got a little bit more at the end.

The Blu-ray features 3 featurettes, so you have about over half hour or so of extras. The first featurette is about the script, getting John Krasinski to come out to help out with the story and direct, getting the cast together, filming locations and all that stuff. The second featurette was about the sound and sound editing. They discuss the challenges of trying to come up with the sound for the movie where there isn’t a whole lot of dialogue. The final featurette was about the visual effects. I didn’t think the aliens looked great when it was the opening scene but they looked best when it was dark out. The aliens also looked like the demogorgon from Stranger Things a little. I almost wish we didn’t see much of the aliens except their arms/legs and certain parts of them. Would have been more scary I think if you left things up to the imagination.

I hope Paramount doesn’t stretch out this franchise out too thin like every other horror movie. What’s next, A Quieter Place, The Quietest Place or how about a prequel A Loud Place before the alien creatures took over Earth? Even though it would be interesting to see how things went down when they arrived, not sure how they would do it since all these creatures would just be swarming at people. Wouldn’t make for a great movie. If you like movies like Signs, Cloverfield, Get Out and IT, you’ll enjoy A Quiet Place. It’s a drama mostly but with a lot of scary shit in it.