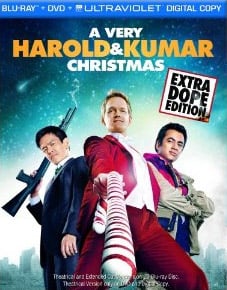 Everyone’s favorite new stoners are back with their third movie! But this time it’s during Christmas and in 3D! A Very Harold and Kumar Christmas is a funny, silly movie that will be watched by me annually now. I just don’t think it’s as good as the second movie.

A few years has passed since the last movie. Kumar and Harold have gone their separate ways now. Kumar has steeped to new lows by dropping out of med school, not living in a clean apartment and buying weed from a mall Santa. Whereas Harold is a successful Wall Street businessman, married to Maria and they live in a nice house. Kumar isn’t handling his breakup with Vanessa too well either, and certainly doesn’t take things too well when she stops over to tell him some news. Meanwhile, Harold goes through leaps and bounds to please his wife’s Father & family, who are visiting for the holidays. When Kumar pays Harold a visit because of a mysterious package he receives, they accidentally burn down Maria’s father’s prized Christmas tree. Harold and Kumar get caught up in more craziness when they try to find a new Christmas Tree in New York City.

This movie had a lot of funny moments; it’s raunchy, silly, and it’s just about perfect for the type of comedy that I like. I could seriously watch these movies all the time and still laugh at them. These are the type of movies you just sit back and laugh, and don’t have to think too much. I did feel a bit weird watching a Christmas movie in February though. I think they should have held onto this release until October. Some of the Christmas stuff in the movie was a nice homage to classics. The claymation scene was a bit out there though.

I still think Harold & Kumar Escape from Guantanamo Bay is the funniest movie out of the three movies so far. And I still think Neil Patrick Harris steals the shows yet again. His death at the end of the second movie is explained in detail, as well as him being gay. You’ll piss yourself with laughter when NPH is on screen. The chemistry between Cho and Penn is flawless, which is one of the many reasons why these movies are great. New casting additions with Thomas Lennon and Amir Blumenfeld were good and would like to see more of their characters in the next movie, if there is one. I have a feeling we will see another one in the near future, especially with the way things ended up. But I would be perfectly happy if they left these alone as well.

I didn’t see this in theaters or in 3D, but could definitely tell they were hamming it up with the 3D. The gags were funny but honestly, I could have done without the entire 3D thing. It’s especially gets tiresome watching it in 2D. Oh look, a magical joint is flying through the air in slow motion. How…neat. The Extra Dope Edition has 6 or 7 minutes worth of footage added back into the movie. What that footage is, I don’t know since this was the first time seeing the movie. The rest of the extras weren’t that spectacular. Thomas Lennon has several clips that were funny but John Cho and Kal Penn were strangely absent from a lot of the special features. There’s a few forgettable deleted scenes and a featurette about the claymation scene. That’s really about it.

My advice would be to buy this around Christmas and watch it then. It’s still a funny comedy (besides the Christmas themed stuff) and worth seeing, but I’d wait to watch it.