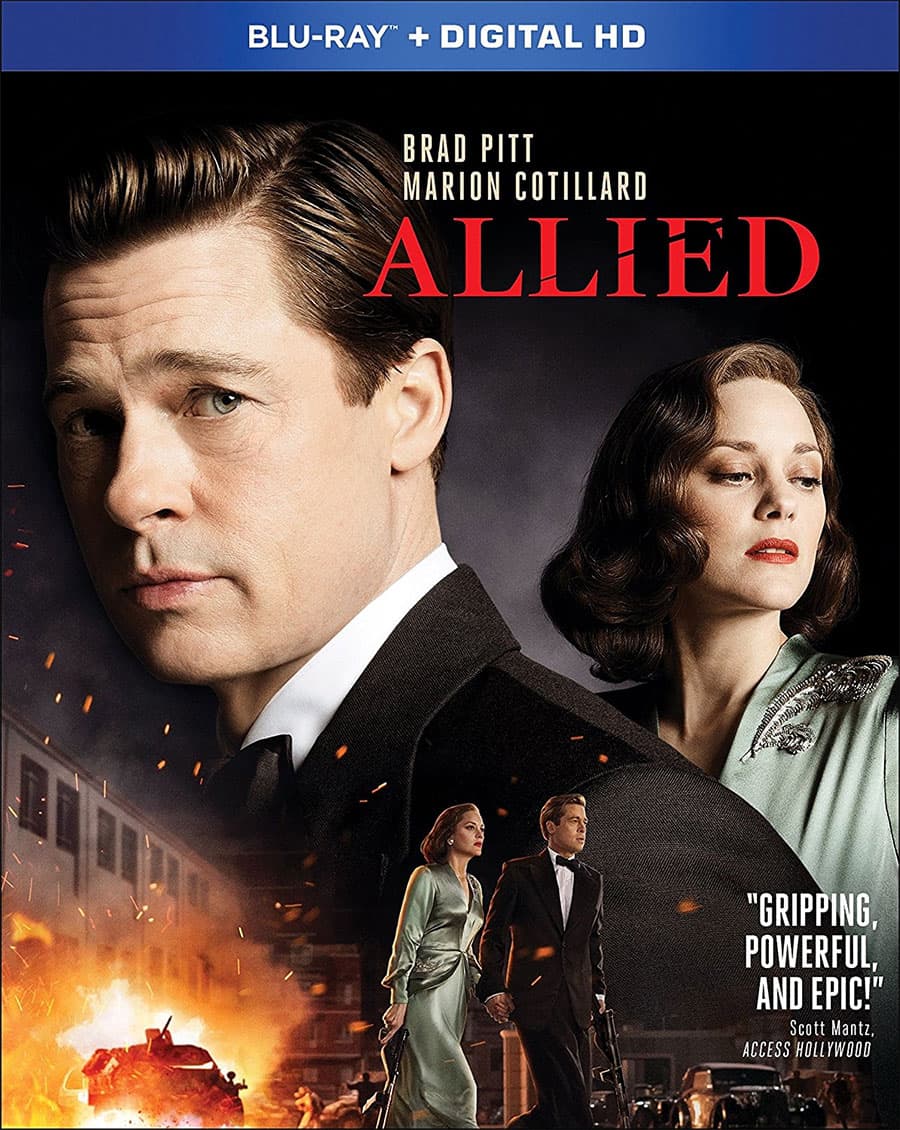 Allied is the latest film from Robert Zemeckis and stars Brad Pitt and Marion Cotillard. I didn’t know anything about this movie but decided to give it a shot. I liked it but thought it could have been fleshed out better.

The movie is a romantic thriller set in Casablanca and London during WWII. Royal Canadian Air Force intelligence officer Max Vatan (Brad Pitt) and a French Resistance fighter Marianne (Marion Cotillard) travel to Casablanca to assassinate a German ambassador. They fall for each other while they are there and they end up getting married and having a daughter together. Unfortunately, Max’s commanding officers reveal that his wife is actually a German spy. He has limited time to undercover the truth or they are both dead.

For the most part, I liked Allied. The story was interesting even though it felt like I’ve seen this type of story before. In a sense, I guess you can make similarities to Mr. and Mrs. Smith which starred Pitt and Jolie. This time it was Pitt and Cotillard, who had nice chemistry together. Jared Harris seems like he’s been everywhere these days but still, I like when he’s in movies. Lizzy Caplan was underused and I thought she would have a bigger role. But for the most part, this is Brad Pitt and Marion Cotillard’s movie. Sometimes Allied felt like a play in a way where they were in just a few locations.

I liked that this was set in WWII because I’m a big WWII buff. In fact, I wish Zemeckis did an entire movie just on the Blitz because that was riveting stuff! Plus, the special effects for it looked good. The special effects were minimal but you can tell where certain effects were applied. Brad Pitt parachuting, matte backgrounds, the blitz and other things like that. I thought the characters backgrounds and story could have been fleshed out better in the screenplay. You just kind of go along with the motions and not really get to know the characters all that much. I still don’t know why they even bothered having Lizzy Caplan be in this for a few scenes. Her character doesn’t do anything to the plot. But hey, she was kissing another woman!

The special features include a piece on production/set design, director Robert Zemeckis featurette, one of the costumes, the special effects, the music and more. There’s lots of little extras on it and will certainly have plenty to watch after you see the film. I found out in the extras that the writer actually heard about this story before about a soldier who ended up marrying a German spy. He simply walked into a room and shot her when he found out. Obviously this doesn’t happen in the movie but kind of interesting that is sort of based on a true story.

Allied is a pretty good movie but it seems like it’s missing something. Parts of it are exciting and nerve wracking and other parts are a bit slow. Brad Pitt and Marion Cotillard look the part and did a good job with the characters. I’d watch this again.

From Stages to the Sahara: Production Design
Through the Lens: Directing with Robert Zemeckis
A Stitch in Time: Costumes of Allied
Lights, Pixels, ACTION! The Vessel Effects of Allied
That Swingin’ Sound: The Music of Allied
And more!