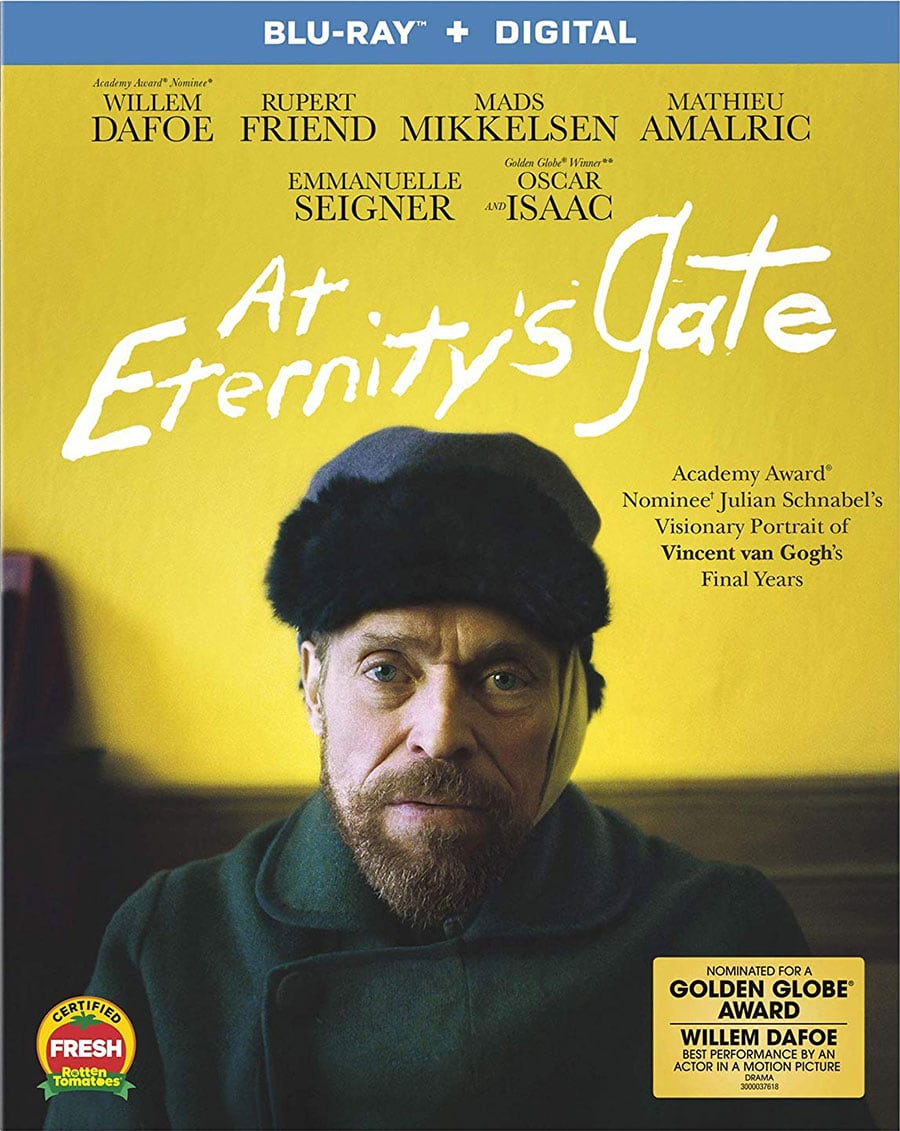 At Eternity’s Gate is getting noticed because of Willem Dafoe’s performance as Vincent Van Gogh and garnered some nominations for it. The movie is interesting and unique, but not sure this one is for everyone.

The film is about Van Gogh’s (Willem Dafoe) final years alive, when he was living down in the South of France. He can’t sell any paintings but still wanders out every day in the fields to paint. His younger brother Theo (Rupert Friend) is an art dealer and financing him to paint. Vincent begins a close friendship with Paul Gauguin (Oscar Isaac) but when Paul decides to leave, Vincent freaks out. After that, Van Gogh can’t seem to get back on track with life and soon finds himself in a mental institution.

This was directed by Julian Schnabel, a painter so definitely a good choice to direct a movie about Van Gogh’s final years. This isn’t your usual bio-pic. Julian gave Vincent’s scenes a first-person style a lot of the time, seeing through his troubled eyes. He used bifocals technique to show us that something was up with him mentally, especially some of his scenes with Gauguin. At times the style works and other times the camera work makes me want to throw up because it was so shaky. They don’t use that technique all the time but at certain parts of the story.

I thought the first half hour was a little too artsy-fartsy (pun intended this time) because it felt like it was just Van Gogh wandering around the fields aimlessly. He’s just raising his hands up and circling in the field for half hour. I definitely felt like some things should have been cut, but then there were other things that weren’t even in the movie. The friendship between Van Gogh and Gauguin was interesting, and Julian alludes that maybe something more between the two was at play.

There’s been rumors the two had a relationship with each other but who the hell knows. Van Gogh was certainly upset when Paul said he was leaving. I was kind of annoyed that they didn’t show the ear cutting scene and it just cuts to black and poof, ear is cut and gone. Him getting shot scene seemed like it wasn’t accurate. Since Van Gogh was crazy, perhaps that’s what he thought happened? I don’t know but felt different than what I read in art history books. Truth be told, I don’t remember much from art history but don’t remember kids shooting Van Gogh.

Other rumors that have always been speculated is reason for cutting his ear off, and then also how he died. Julian Schnabel seemed to go the theory route and not sure that’s what happened in real life. Is there a way to prove it? I don’t know. When I read wikipedia (not the best source for the truth but still), seemed like a lot of things were different than what happened in the movie.

I thought Willem Dafoe’s performance was good, but Oscar-worthy? Hmm, not so sure. Just felt like Dafoe and didn’t even bother with an accent. The first 5 minutes people are speaking French and whatever languages, but then it goes into English. I liked that technique showing that yeah they probably spoke this way but we didn’t have to sit through a subtitle movie. Oscar Isaac was good as Gauguin, another famous artist who got famous after he died. Perhaps someone can do a biopic about his life next because seems just as interesting and complex as Van Gogh’s. The rest of the cast was good, Rupert Friend was good as Theo Van Gogh, and was nice to see Mads Mikkelsen in the film, although it was pretty much a cameo. At Eternity’s Gate demonstrates well that Van Gogh had quite a lot of mental problems and reason for his downfall. If it wasn’t for his brother and brother’s wife, he wouldn’t have even gotten famous from his painting. I would have had liked to have seen more about that.

Blu-Ray has just a few quick featurettes about Julian being a painter and directing this, and a few on Van Gogh. There’s audio commentary as well but I didn’t get a chance to listen to it yet. Plus, there’s also a digital HD code which is standard for most studios these days.

At Eternity’s Gate is an interesting take on Vincent Van Gogh and definitely unique. Since there’s not a whole lot of dialogue, the film score had to be memorable and I thought it was. It was done by Tatiana Lisovskaya. I would have preferred a more standard biopic about Van Gogh. Not so much the beginning to end of it, but felt like Schnabel left out key moments of his life. I guess we’re supposed to assume what happened but it’s a movie, show us! Willem Dafoe was good, but it just felt like Dafoe and not so much Van Gogh. At Eternity’s Gate will be an acquired taste and not for everyone. Since I’m an artist myself, I liked the movie but had I made it, I’d probably do things differently.

Features:
Made by a painter
Channeling Van Gogh
Vision of Van Gogh
Audio Commentary with Julian Schnabel and Cowriter and Coeditor Louise Kugelberg