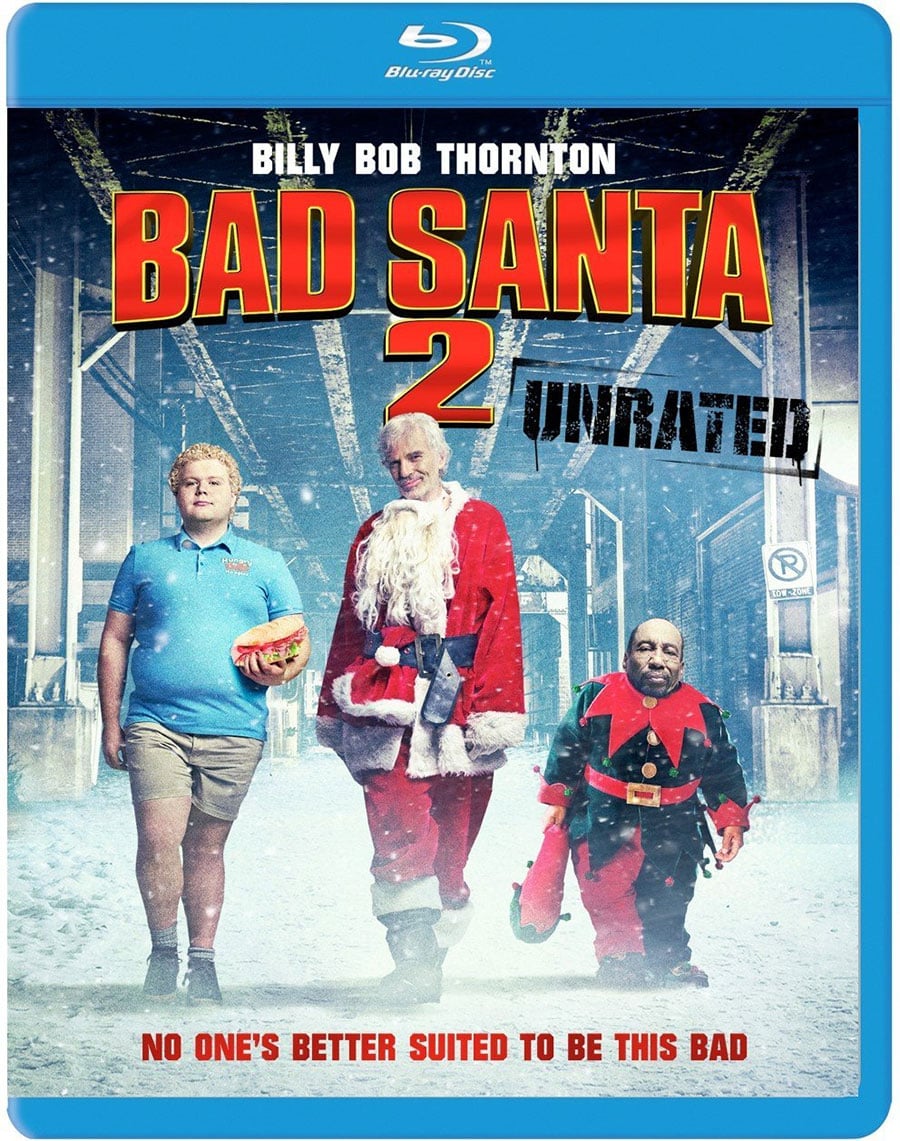 The long-awaited sequel to the super vulgar Bad Santa is finally out. While we all can agree it’s not as good as the first movie, this sequel is still pretty funny. Thankfully it’s not as terrible as other comedies that decided to do a sequel. Basically, if you liked the first movie, you’ll like this one too.


Bad Santa 2 takes place 13 years after the first movie. Willie Soke (Billy Bob Thornton) is still a piece of shit, back to be addicted to sex and booze. He tries to commit suicide until Thurman Merman shows up, who just turned 21 and works at a sandwich shop. Doesn’t that make you feel really old? Thurman delivers a package to Willie and it’s from his former partner, Marcus (Tony Cox). Marcus got out of jail and wants to do another job with Willie, and bury the hatchet. Willie initially refuses but gets enticed to do it. This time, they will have company and Willie’s not going to like it. That partner is just as despicable if not more so, his mother Sunny (Kathy Bates). If thought their last plan was low, wait until you find out who they want to rob next!

I wanted to see this in theaters but just never got around to it. Tough with a little one and being able to see every movie you want to see. Thankfully, the movie came out pretty quickly, even though I’d rather be watching this movie around Christmas. Although, Bad Santa isn’t the type of franchise that screams Christmas joy. In other words, you can watch these two movies any time of the year I think. I have to say I was glad that the movie wasn’t a big letdown like Anchorman 2 was. It was just as filthy and crude, which I loved about the first movie. There’s something about it that makes me not like this as much as the first one; not sure what it was. Maybe that it felt like more of the same but with new setting, and some new characters. I guess if it’s not broken, don’t fix it. If I had to complain about anything, it’s that the ending felt a little too unbelievable with a certain character surviving. I’m glad that person didn’t perish though.

There’s really no character you want to root for except Thurman. I guess you can root for Willie, because even though he’s a jerk there is an ounce of decency in him every once and awhile. Kathy Bates joins the team this time but I wasn’t crazy about her character. She was beyond obnoxious I thought but she did have a few great lines though. Guess they needed another villain for Willie. I’m glad they brought back Tony Cox because it just wouldn’t have been as good if he wasn’t there, fighting with Billy Bob. Those two have great chemistry together, reason why the first movie worked so well. Having Christina Hendricks in the movie was nice and wouldn’t mind seeing her again if they decide to do another one. Not sure there would but I certainly would love to see another one with these characters.

The Blu-Ray has an unrated and theatrical version to watch of the movie. Since I couldn’t get to the theater to see this, I just stuck with the unrated version. No idea what’s different or not. The Blu-Ray also has a few featurettes to watch after you’re done with the movie. There’s a featurette about Brett Kelly, who plays Thurman Merman, there’s a funny gag reel, a different opening and ending and some deleted scenes. I actually liked the alternate opening, and parts of the ending but I can see why they picked the ones they picked. One thing that annoyed me about the Blu-Ray itself it there wasn’t a Digital HD code. I thought that’s the standard these days and it wasn’t offered. Very lame.

Bad Santa 2 is a very funny and very vulgar movie, just like Bad Santa. It just wasn’t as good as the original and felt a little forced sometimes. But overall, I liked the movie and enjoyed watching it.