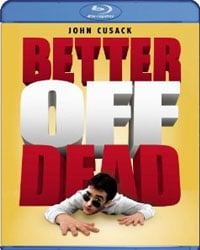 I WANT MY TWO DOLLARS! One of the best comedies of the 80s is now available on Blu-Ray! I’m not sure everybody will want to upgrade to Blu-Ray but I think the movie looks the best it’s looked ever!


Better Off Dead is a coming of age movie that stars John Cusack as Lane Meyer. Lane is obsessed with his girlfriend Beth (Amanda Wyss), so much that he has a thousand photos of her hanging up in his room. One day she dumps him for the jerk ski team captain and Lane wants to win her back. When that doesn’t work, he tries to commit suicide several times, very poorly might I add. His family doesn’t help much either when his Dad is crazed about his garage windows being smashed out by the paperboy, his mom is too busy trying to make extremely bad food, and his little brother doesn’t talk to anyone and just wants to build rockets and pick up trashy women. Meanwhile, Lane’s neighbors get a high school exchange student, Monique (Diane Franklin) from France and sooner or later, Lane meets up with her. She helps Lane get his life back on track.

Every other year or so I have to watch Better Off Dead, it’s one of those 80s comedies that I still crack up at. I still quote the movie to this day and anyone else who’s seen it probably quotes it as well. “FRENCH fries,” “Sorry your mom blew up Ricky,” “This is pure snow! Do you have any idea what the street value of this mountain is?” and “I’ve been going to this high school for seven and a half years. I’m no dummy.” I think after all these years, the movie still holds up well as being pretty funny. Some scenes I never liked like the Hamburger rocking to Van Halen is still stupid. I think if the movie was made today, I’m sure everyone and their mother would be bitching about joking about students trying to commit suicide. With the 80s, you could get away with it; today, not so much.

Every time I watch the movie or movies that are similar, I always end up finding something else to laugh about. I just never realized how crazy Lane was when I was younger. I mean, who has cardboard cutouts of their girlfriends heads as hangers in their closets? The brilliance of Curtis Armstrong’s character Charles De Mar and all his classic lines from the movie. But I always crack up when he starts hysterically crying laughing at Roy Stalin when he made a bad joke at the dance. Or when the doors come flying open when Ricky enters the high school dance. It’s the little things like that make me love this comedy.

The quality of the Blu-Ray is okay. Nothing is that special about it, it’s just an DVD upgrade and I honestly don’t even know if they changed anything from the DVD. People have complained about the audio of the movie but I didn’t really notice. Basically when it comes down to is if you don’t own Better Off Dead and own a Blu-Ray player, than get this. But I don’t really think it’s worth upgrading if you already own a DVD.