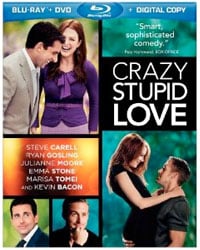 Crazy, Stupid, Love is a romantic comedy that actually is worth seeing. It also has it’s fair share of laughs and features a terrific cast! This one can be enjoyed by both genders.

Cal Weaver (Steve Carell) thought he had the perfect marriage with his wife Emily (Juliane Moore). But she admits she had an affair with her co-worker (Kevin Bacon) and she wants a divorce. Cal doesn’t take the divorce well and their children don’t take it well either, especially their 13-year-old son Robbie (Jonah Bobo). Robbie begins to get cynical towards love when he repeatedly gets turned down by his 17-year-old babysitter Jessica (Analeigh Tipton). Cal begins going to bars and making a spectacle of himself. A young, womanizing, handsome player named Jacob (Ryan Gosling) comes to his rescue and gives him a makeover and a lesson on picking up women. Cal has some fun for a little awhile but wants to win back his wife. For Jacob, after being with women after women, he finally finds a girl (Emma Stone) who he wants to be serious with.

I didn’t know much about Crazy, Stupid, Love except from word of mouth a little that it was funny. I certainly laughed a lot during the movie, and the story was interesting enough that it kept me engaged throughout. I especially didn’t see where it was heading and liked the twist towards the end of the movie. It made things interesting and really hilarious when things come together. Besides a strong script and story, the cast is also another selling point. Steve Carell escapes the Michael Scott syndrome and makes you forget about that character. He still has some tendencies of Michael but this is a different character.

The chemistry between him and Ryan Gosling was good. The best scenes in the movie is when those two are together on the screen. I also really like the storyline of the Robbie and his obsession with an older girl in high school. We’ve all been there and I certainly could relate. Well the liking an older high school student part and not the girl catching me sharpening my pencil thinking of her part. The parts with Marissa Tomei were also very good and got a lot of laughs out of me. The movie isn’t all laughs but when the scenes are supposed to be funny, they are!
The Blu-Ray extras contain some deleted scenes, two featurettes and a digital copy of the movie. “Steve And Ryan Walk Into A Bar” is a quick 6 minute behind the scenes/interview with Steve Carell and Ryan Gosling. They just talk about the bar/club they are in, dating advice and other things. The Player Meets His Match is about Jacob’s character, and just more behind the scenes stuff and interviews. The deleted scenes section is about 12 minutes long and has alternate takes in there as well. I actually quite enjoyed the deleted scenes, and sometimes I can see why they were cut. But the movie was already a little long so that’s the only reason why most of these were cut.

Crazy, Stupid, Love is one of the better romantic comedies to come out in the last 5 years. I don’t think it’s for everyone but I think if you give it a shot you might enjoy it as much as I did.

Features:
Steve And Ryan Walk Into A Bar
The Player Meets His Match
Deleted Scenes
Digital Copy Of Feature Film