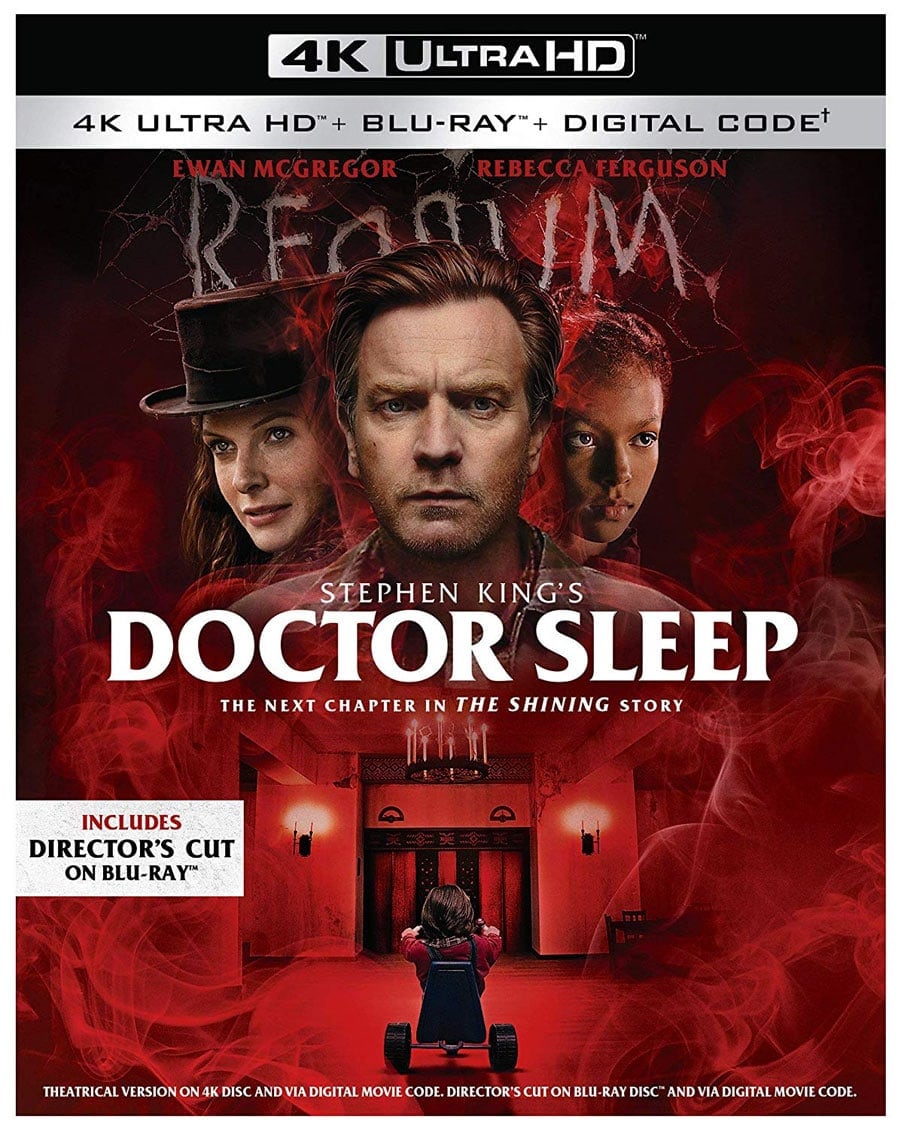 The sequel to the Shining didn’t do as well at the box office as other Stephen King movies, which is a shame since Doctor Sleep is a good movie. Long but it’s good I thought. Plus, it’s disturbing at times but I enjoyed it, and this is coming from someone who isn’t a fan of horror.

Doctor Sleep takes place several decades after the events of the Shining. It focuses on Dan Torrance (Ewan McGregor), a man with “the shining,” psychic abilities where spirits are drawn to him. Dan has been living in a bottle for decades to suppress his shining and with what happened as a child at the haunted Overlook Hotel. He moves to New Hampshire to get away from his demons and start a new life. Danny becomes a penpal, in a way, with a young girl Abra Stone (Kyliegh Curran) who has stronger abilities than he does. Meanwhile, The True Knot, a cult of psychic vampires led by Rose The Hat (Rebecca Ferguson) and Crow Daddy (Zahn McClarnon) hunt down, torture and kill young children with psychic abilities. They take their “steam” so they can live longer. Abra convinces Dan to help her defeat the group before they harm more people.

I don’t remember requesting this movie, just because I have never seen The Shining before and not a fan of horror. So when I got it, I was like, okay I guess I’m going to watch the Shining and this. The Shining was interesting and definitely not as scary as I thought it might be. I thought the score and jump scares were more terrifying than what was on the actual screen. Of course I’ve seen that iconic scene in the movie but just never saw it from start to finish. I didn’t really know anything about this sequel, and didn’t know Stephen King wrote it back in 2013. I think Doctor Sleep will please Kubrick’s The Shining fans and Stephen King book fans. I haven’t read the books but I know the complaints and how King was mad with the Shining years ago. Mike Flanagan combines things from the Shining and Doctor Sleep and blends them nicely together that it should satisfy people. Both movies change things around but I think in the end, fans will appreciate this.

Ewan McGregor was good in the role, and had nice chemistry with Cliff Curtis and Kyliegh Curran. She was really good and I’m finding that more and more talented young kids can act these days. Even back in the early 00s, child actors couldn’t act for shit but thankfully that changed. Rebecca Ferguson played the villain really well too. Her character was part creepy, part sexy in a way, and it just felt you couldn’t stop her. There’s one scene in the movie that I won’t be watching again, and a bit traumatic if you’re a parent involving one of the True Knot’s victims. Even watching part of it in the extras, when they were showing the filming of it, I wanted to skip ahead because it’s deeply disturbing. If I had to pick which scene will haunt me more, IT’s opening scene or this, I’d pick this scene from Doctor Sleep. Stephen King must not like children. Thankfully most of the movie is watchable and isn’t all that bad. Flanagan didn’t opt for the jump scares and things like that from the first movie. The eerie music returns in spots, including parts of Wendy Carlos’ iconic theme music but the new score is similar in style.

I watched the theatrical cut because I wanted to watch the movie in 4K. The Director’s Cut isn’t in 4k, although it comes with a UHD digital copy so maybe I should have just watched that? This is another movie where it was already 2.5 hours, I really didn’t want to watch a 3 hour movie of something I might not be into. Now I know what the movie is about and what happens, I’ll definitely go back to watch the director’s cut. I just won’t be watching that one scene.

I’m assuming some of the extra footage features flashback scenes with Jack and Wendy Torrance at Overlook Hotel and the aftermath of that. I was surprised to see Henry Thomas appearing in this as Jack/The Bartender. You can see him in the extras after watching the movie. They show Henry and others on the set at Overlook location, as well as interviews with Stephen King and Mike Flanagan. Seems like King was happy with this movie and how it corrected some of the problems he had with Kubrick’s The Shining adaptation. There’s only 3 featurettes but they are worth watching if you have a half hour to kill and are interested in the movie.

Doctor Sleep wasn’t a movie on my radar because I’m not really a horror person. While there’s one scene I really hated and found disturbing (mainly because the kid was a good actor), I thought the rest of the movie was interesting. Mike Flanagan made a solid sequel to both The Shining the movie and the book, and faithfully adapted the Doctor Sleep as well. I’m sure some people won’t like this but as a non-horror fan, this wasn’t as bad as I was expecting it to be. Give this a shot if this sounds like your thing.

Features:
From Shining to Sleep
The Making of Doctor Sleep: A New Vision
Return to The Overlook