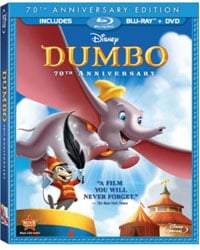 The Disney classic has finally been released on Blu-Ray and Disney nerds will most definitely want to own this one. The quality is the best I’ve ever seen, but of course I’ve been saying that with every release of Dumbo that has come out. But this, I REALLY mean it!

I’ve already reviewed Dumbo on DVD for the 2006 Big Top Edition, which you can read the review here. Since everyone already knows the story of Dumbo, there’s really no sense in talking about the story and plot.

The Blu-Ray really enhances the animation and the movie looks the best it’s ever looked. Sadly it’s not in widescreen and probably never will be. You have the option of watching the film in expanded viewing mode where there is matte paintings on the side that make it more pleasant to watch the movie. When they show scenes on a train, they have old looking train wagon panels, or when it’s in the circus tent it’s part of the tent. While others might find this distracting, I liked it. The movie itself looks cleaner but we have to remember there’s only so much you can do with a movie that was made in 1941. I’m still amazed at what people can do when it comes time to digitally restoring older movies. I bet the process is a pain but it’s something I’d actually consider learning how to do. The film was already cleaned up nicely on the DVD editions for the 60th anniversary and the Big Top Edition, so just remarkable they cleaned it up even more with the Blu-Ray.

The Blu-Ray features include never before seen deleted scene, a deleted song, the making of dumbo, some audio commentary, galleries, an animated short and more! Like with most Disney Blu-Ray DVD or Blu-Rays, I liked watching the “Backstage Disney” stuff like the making of Dumbo and A Ride of Passage. There’s where the film fanatics will want to go to watch stuff, plus the deleted scene was interesting as well.

Dumbo is a Disney classic and deserves to be seen this way. If you already own a DVD and want something better, than the Blu-Ray is the way to go!