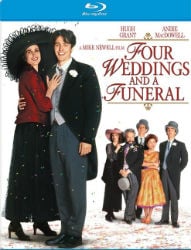 Wow, back to back “Romantic Comedies” reviews. What is happening to me? Four Weddings And A Funeral, the sleeper hit of 1994, starring Hugh Grant and Andie MacDowell that takes place in England in the busy times of a group of friends. Directed by Mike Newell (Harry Potter and the Goblet of Fire) and Written by Richard Curtis (Love Actually) do a great job of creating stories that not only woman can watch but men don’t have to feel ashamed watching a “Chick Flick.” Of course the film taking place in London always help out any film. Featuring many laughs and an interesting story with so much happiness and sorrow in one film, surprisingly one that is now 17 years old and only the first time I’ve seen it, was rather enjoyable to watch.

Charles (Grant) is off to one wedding when he meets an American girl, Carrie (MacDowell) and they hit it off. Charles is always the single guy at weddings and wonders when is he going to find his true love? Will Carrie be that person? Certainly appears to be headed that way. Friends who just happen to meet at wedding One end up getting married next a few months later. Charles bumps into Carrie again, after they have a tryst after Wedding One, but this time Carrie is with some wealthy Scotsman. Charles and Carrie still manage to get a bit friendly but things dissipate as Carrie thinks this is just a fling or two. In Wedding 3, it’s actually Carrie and the Scotsman and Charles is still invited and shows up graciously, albeit a tad late just as they are exchanging their vows. A death occurs at Wedding 3 which leads to a funeral, and finally the 4th wedding is Charles, but to whom? Hmm, a bit of mystery for a few minutes and then of course drama ensues for Charles when Carrie shows up, newly separated.

The film itself was not bad in HD. A few minor flaws like lint on the lens that was distracting for one or two scenes, and some film grain throughout but the film is over 17 years old. The extra features appear to be carried over from the DVD versions of the film, not in HD. Some typical fare like audio commentary with the filmmakers, deleted scenes and some featurettes with the cast, and crew.

Having never seen the film, I really enjoyed it. It’s not the typical “Chick flick” and features a good balance of humor, drama, and great scenery. Taking place in London and throughout the United Kingdom, it really captures the essence of an English wedding. Hugh Grant has great charisma and plays his character well. I don’t necessarily see the big to do over Andie MacDowell’s character. Something that sleeps with Charles any chance she gets and yet marries some rich Scotsman. Not the way I would have handled things but that makes this a “love” story and people will do crazy things in the name of love.

Features:
Audio Commentary with Filmmakers
Deleted Scenes
The Wedding Planners Documentary
Four Weddings And A Funeral: In The Making Featurette
Two Actors And A Director Featurette