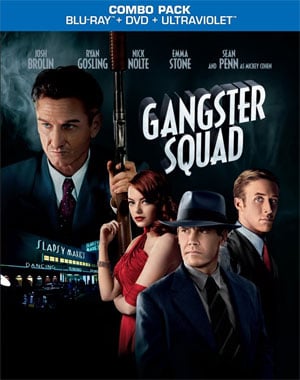 Gangster Squad has a good cast and an interesting story, but the movie still falls short for me. The movie has an Untouchables vibe to it but it’s nowhere as good as that. The movie is available now on Blu-Ray combo pack, DVD and digital download!

The movie is loosely based on the LAPD in the late 40s/early 50s, and centers around mobster Mickey Cohen (Sean Penn) and the vigilante cops that formed a squad to go up against Cohen. Mickey Cohen is becoming one of the powerful people in LA, with a lot of cops paid off and looking the other way. One cop, Sgt. O’Mara (Josh Brolin), isn’t paid off and is trying to put away Cohen. O’Mara ends up getting selected by the police chief to disrupt and drive out Cohen out of LA. O’Mara picks a few different officers on the police force, and his friend Jerry Wooster (Ryan Gosling) turns him down originally but changes his mind eventually.

I didn’t think anything of Gangster Squad when it was released in theaters, but decided to give it a chance on video. The movie has a good cast and I’m all for classic gangster movies, but there’s something I just didn’t like about Gangster Squad. Maybe it was the depth of the characters and just not giving a shit about any of them. When someone died, I just shrugged. I thought the romance between Ryan Gosling and Emma Stone was forced or maybe I just didn’t care about that either.

The action was good though, and was exciting to watch when that happened on screen. I liked the stylish look that Ruben Fleischer did and how some shots were done, well except the unnecessary slow-mo shots. I just think the slow-mo shots need to stop in films. The car chase scene was cool because it pans down to cars chasing after each other and then one long swoop pans down to Ryan Gosling shooting a gun. That scene stood out to me.

The Blu-Ray combo has a few special features like commentary, a couple of featurettes and deleted scenes. The true story about Gangster Squad featurette was interesting, and I liked just all the behind the scenes footage. The filmmaking process interests me and I like Fleischer’s style because he came from a music video background. “The Set Up” extras are almost an hour long but gives fans of the movie ample time from behind the scenes. There’s a documentary on Mickey Cohen that’s cool to see after watching the movie as well.

Gangster Squad is the type of movie to rent on a rainy day or something to catch on cable but I don’t think it’s really buy-worthy (at least I think so). I liked the movie but felt it could have been better in a lot of areas.