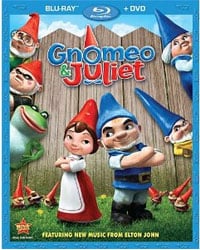 Just like the original story, Gnomeo and Juliet is about feuding families, but this time they are garden gnomes in England. There are the Blue gnomes, where Gnomeo (James McAvoy) is apart of, and then there’s the Red gnomes, where Juliet (Emily Blunt) is apart of. The gnomes owners are Mrs. Montague and Mr. Capulet, feuding neighbors who bicker and call each other names. While the owners are away, the gnomes come to life and take care of the garden and compete in low mower races. One day, Gnomeo and Juliet meet after going after a flower orchid and they instantly click with each other. They secretly see each other while their families feud and cause havoc for each other. Sooner or later, their relationship is discovered and things happen, but not like how it was originally done.

I was pleasantly surprised how much I liked Gnomeo & Juliet. The gnomes were just so cute, and the hidden jokes to more adult themes or books was a nice touch too. Believe it or not, having Elton John executive produce this and have his music so involved with the story helped a lot as well. Who would have thought that hearing “Saturday Night’s Alright For Fighting” and “Crocodile Rock” in a dramatic film score would be so fun!

The cast was great, and filled with many talents like James McAvoy, Emily Blunt, Michael Caine, Maggie Smith, Jason Statham, Matt Lucas, Ozzy Osbourne…PLUS cameos from Patrick Stewart, Hulk Hogan and Dolly Parton. Each gnome or character has it’s own qualities, and it’s quite funny to see Ozzy a talking reindeer. I wonder if that was the first choice for that character? Hearing Michael Caine speaking, just makes me think of Steven Coogan and Rob Brydon in The Trip doing impressions of him. “YOU WERE SUPPOSE TO BLOW THE BLOODY DOORS OFF!” Just search on YouTube Steve Coogan Michael Caine and you’ll see what I’m talking about.

The character designs and animations is another selling point for the movie. I really like how they designed some of the characters. One gnome had a speedo bathing suit (like what Borat wears), with burnt marks on his cheeks haha. I was wondering if they were going to have a similar end to the Romeo & Juliet, but they obviously changed it up a bit. It’s rated G, and you don’t want a whole theater of kids crying do you? A statue of Shakespeare pointed out to Gnomeo that his story was similar to Gnomeo’s, but Old Bill was proved wrong in the end.

The special features include some quick featurettes like Elton Builds a Garden, some character featurettes, music videos, some alternate endings and deleted scenes. I watched the featurette on Elton John and what kind of impact he had on the movie, which was more than I thought. The alternate ending and deleted scenes were incomplete and in storyboard form. As much as I want to see deleted scenes, I usually can’t sit through the storyboard versions of them. Like with most movies nowadays, this one is a combo of Blu-Ray and DVD and Blu-Ray is the preferred choice for viewing. Everything is just better on Blu-Ray, the extras, the look, the audio and everything else.

If you have kids or don’t, Gnomeo & Juliet is a cute flick to put on the weekend and just enjoy. The animated movie is sweet, it’s funny and it will make you want to grow a garden in hopes that these gnomes will take it over.