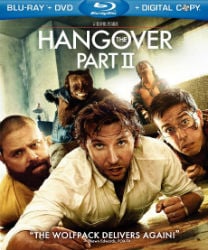 The wolfpack is back! The follow up sequel to the smash hit, The Hangover takes the gang on another wild adventure overseas to Bangkok, Thailand. Bradley Cooper, Ed Helms and Zach Galifianakis star as best friends who travel overseas for their friend Stu’s (Helms) wedding and ultimately his bachelor party. The film continues in the same formula as the first film, but with a different, exotic locale makes it still feel fresh, and funny. As they say, if it ain’t broke, don’t fix it.

Phil, Stu, Alan and Doug are heading to Bangkok! This time around, Stu’s getting hitched, and it’s not to the prostitute in Vegas either. Stu is not planning on anything big either. Hoping to lay low with his wedding plans, he brings Phil and Doug to the IHOP for a Bachelor Party Brunch. Obviously, that does not go over big with the guys who want to live it up overseas. Alan (Galifianakis) pressures his “wolfpack” into bringing him along to the festivities in Thailand, met with much reluctance. Adding to the mix is Stu’s future brother in law, Teddy, who is a 17 year old Prodigy who is in College in the LA area. Alan of course does not like this one bit as it disrupts the chemistry of his “wolfpack.” Joining the party, is Mr. Chang whom you may remember the first one and provides again some very hysterical scenes. Not giving away the plot and the funny parts, the guys again find themselves in trouble and unaware of their surroundings.

The extra features were not massive but the ones they did feature, were worth it to check out, including a look at filming on location in Thailand with the cast and crew. A few short, funny featurettes with Mr Chang giving a tour of Bangkok and a look at filming with the monkey on set. Bradley Cooper and the monkey really hit off apparently. Not to mention the gag reel is always a must watch, especially with these guys who look like it’s more fun than work most of the time. I didn’t really enjoy the “Unauthorized documentary” on the film and the “hijinks” the cast had over in Thailand. I thought it was pretty silly to be honest.

Despite some other people’s opinions about the Hangover films, ahem Bryan, these films were blockbuster hits and a third film is already being written. Both films are formulaic in style, but people love them so why change? I hear the third film might actually vary which will breathe fresh air into the trilogy. The chemistry between the cast is great and they really are a funny group of guys. The writing and directing of Todd Phillips really helps too. He’s a proven comedic director with hits like Old School, and Road Trip as well. Filming in beautiful island locales are a big plus and changed things up from the stale use of Las Vegas for every wild and crazy dude film. I suppose I would have liked them switch up the formula a tad, and push the envelope even more so with the movie being filmed in Bangkok but hopefully with the third and rumored final film, we all should expect the best for last.