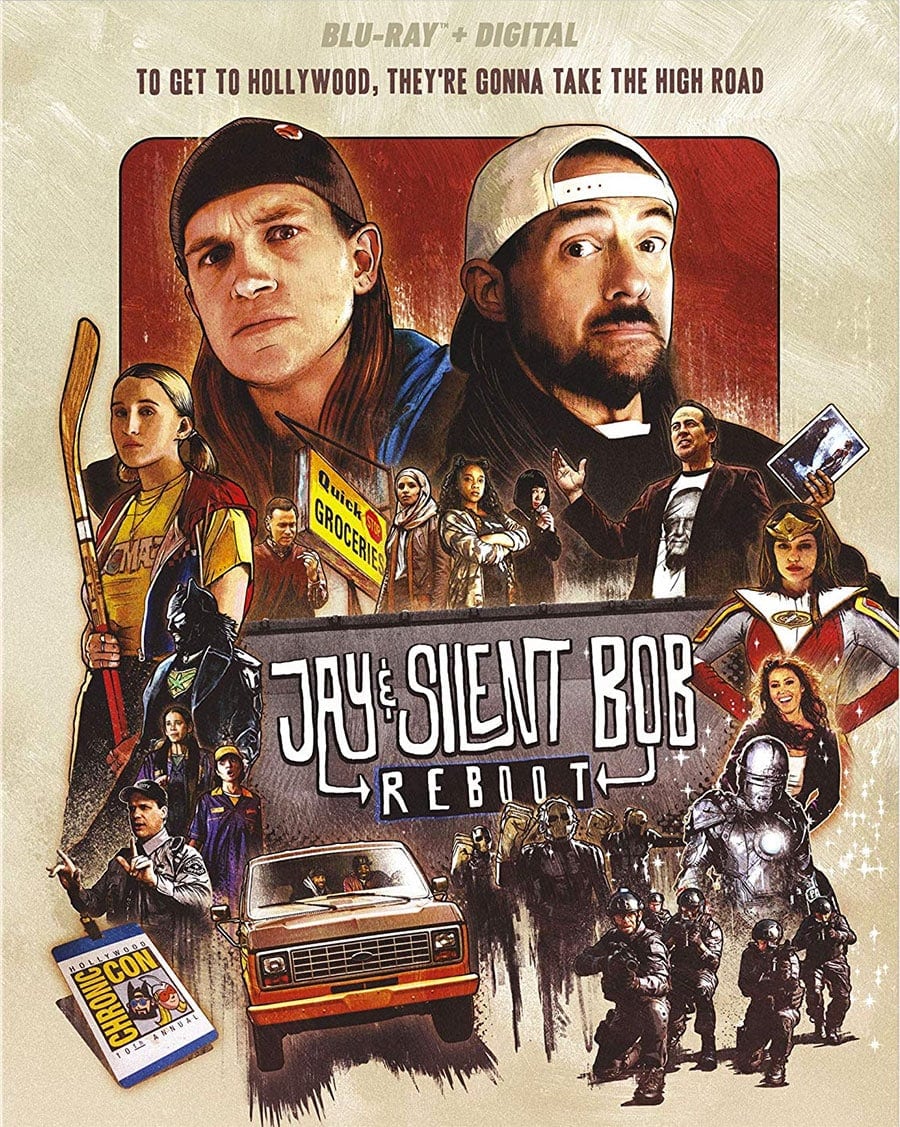 Jay and Silent Bob are back with another movie from Kevin Smith. Before you get too excited, hate to break it to you but this movie seems really forced and unbelievably not funny.

Jay and Silent Bob Reboot is pretty much Jay and Silent Bob Strikes Back, except it’s a satire on reboots filled with lots of cameos from friends of Smith’s and of the View Askew universe. The basic premise is that the duo (Jason Mewes, Kevin Smith) have been getting through life by selling weed in the video store location but are soon busted. They get forced to sign their names over to the film studio that put out Bluntman and Chronic, since that was being rebooted as well. So they travel over to “Chronic Con” to stop it.

I’ve always been 50/50 when it comes to Kevin Smith movies. Mallrats is my favorite, but I also like Clerks (well most of it until it gets too shout-y), Dogma and Zack and Miri Make a Porno. With Clerks II and this movie, everything just felt forced and so unfunny. The trailer certainly didn’t do the movie any favors. Any “funny” part that was included, along with all the cameos. Not sure why people put that stuff in the trailers. I hate to bash a movie from a guy who almost died from a heart attack, but I wanted to turn this off within the first 15 minutes. Every joke just wasn’t landing, the direction was all over the place. It felt like random skits and were just stitched together in post-production. There’s some random Klan rally in the movie (where did I see that before, oh right… Harold and Kumar). It seemed like all the cameos were in the movie just for the sake of it. Plus, Kevin Smith even makes fun of it in the movie, that all of his friends were probably there because he almost died.

I did like some parts of Jay and Silent Bob Reboot, mainly the brief scene with Jason Lee as Brodie or Smith poking fun at Comic Cons. I didn’t really laugh but it was a more of “ah that’s ironic and funny” kind of thing. Chris Hemsworth’s cameo was funny and I liked the end credits stuff too. It’s kind of sad that I had to list the end credits bloopers and extra scenes as something as the funniest parts of the movie. At this point, people watching this are knowing what they are getting with a Kevin Smith movie. I was never a fan of the characters Jay and Silent Bob and I usually liked the other characters better. I never found them to be main character material. Jay always annoyed me with the “snooch” phrases and just his loud, obnoxious dialogue from him. I know Kevin was going through some things during this, but I was hoping for something a lot more fun and just a better movie overall. In a way, this movie feels more like a college film than Clerks ever felt like.

The Blu-Ray contains interviews, Kevin & Jay interview the cast and crew, bloopers and “hair” reel. The cast interviews are almost an hour, and Kevin and Jay interviewing people is almost a half hour too so that’s a lot of content right there. I enjoyed the shorter blooper reel and the hair reel. At least people who actually liked this movie will have some extras to enjoy.

Not sure why I bothered to review this but I was hoping it would be something at least…a little funny. It was not. I wanted to turn it off within 15 minutes because I could already tell what type of movie this was going to be. It wasn’t funny, the jokes were too forced and even the acting didn’t feel natural either. There’s a lot of cameos in this but even that couldn’t help this. Unless you’re this die-hard Kevin Smith / Askewniverse fan, I would suggest avoiding this because it will be a disappointment to you. I’m happy Kevin Smith is alive and well now, but this was a big letdown and I hope his next movie is more thought out and done better.