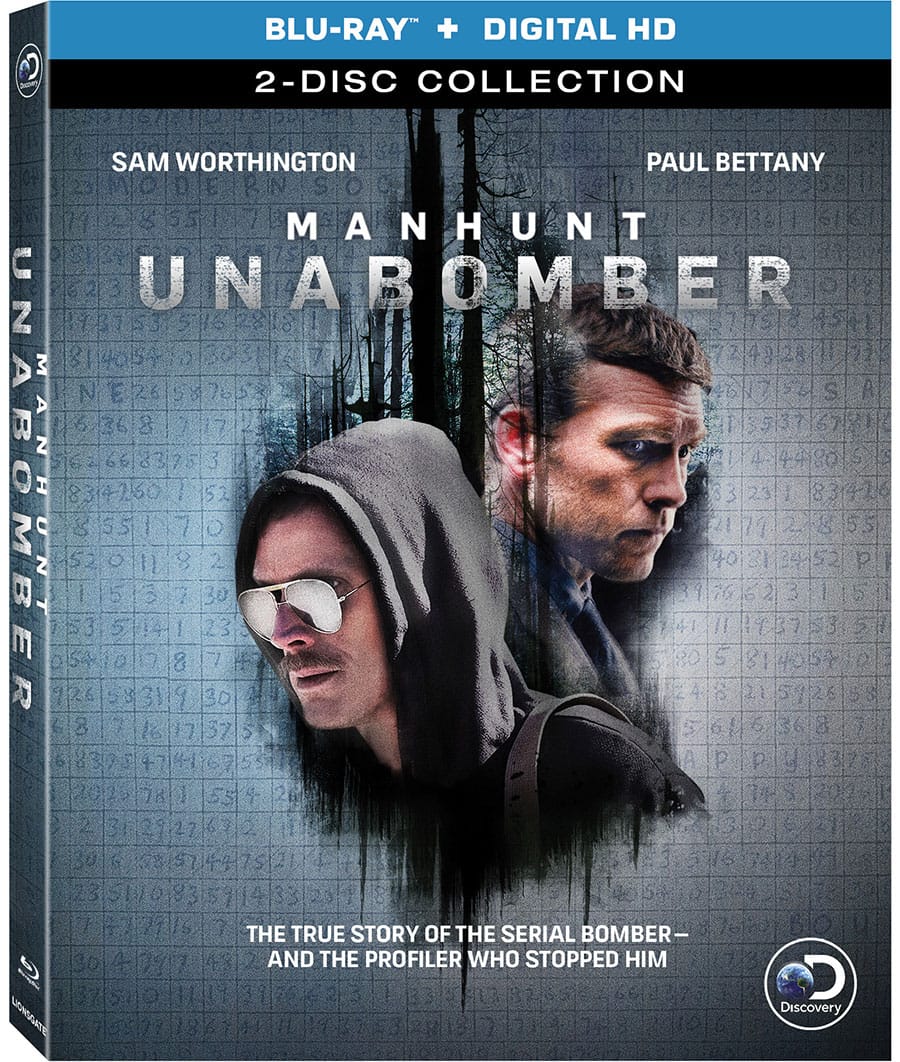 Manhunt: Unabomber is a mini-series about The Unabomber and it’s pretty interesting! It’s especially good for a mini-series that aired on Discovery Channel of all places. The series is now out on Blu-Ray, DVD and Digital HD.

The series is based on the true story of the Unabomber, but fictionalized. It centers around FBI agent Jim Fitzgerald (Sam Worthington), who pioneered the use of forensic linguistics to apprehend Ted Kaczynski (Paul Bettany). Jim gets so caught up in the case that he forgets to be a husband and parent. Jim is not only up against The Unabomber and trying to find out who he is, but he has an uphill battle with his own peers.

When I originally requested this, I thought this was a movie that aired on Discovery Channel. I looked up the rating on Rotten Tomatoes and saw it was high so I gave it a shot. Then I get the Blu-Ray and find out it’s a mini-series – even better! I just watched Mindhunter on Netflix and have been in the movie to watch some historical crime series like that so this is a good companion to it. It’s not as good as Mindhunter but still very entertaining to watch if you like this sort of thing.

I remember the Unabomber’s infamous sketch, the fact that he was really smart, and that he was captured in the middle of the woods but that’s about it. So from that standpoint, it was nice to get some of the history about him and the FBI agent Jim Fitzgerald. Sam Worthington does his American accent okay and I’m overall fine with him in the lead. I’m sure others will have a problem with his acting but I didn’t. Paul Bettany was good as Ted and did the accent fairly well. It seemed like a lot of non-Americans were in this mini-series.

The one issue I had was the editing of it. We’d get some flashbacks to when Ted was sending the bombs, which is fine. Then we would have the show jump to the part where Jim was having to go and talk to Ted about pleading guilty for the trial. Then it would go back to mid 90s and it was about them trying to catch him. It was just all over the place and would have been better if it was just told in chronically order. Other complaint was just the whole backstory for Ted. I really didn’t care to know and try to humanize him, at least with the flashbacks when he was a student at Harvard. The episode felt out of the place with the other ones. Other than that, I loved the show and hope they continue the manhunt series like they do for American Horror Story and The People Vs…There’s a lot more stories to tell and if the majority of people involved with this series are back (with the exception of executive producer Kevin Spacey), that would be great.

The Blu-Ray doesn’t really have a lot of extras. There’s 3 very quick featurettes that add up to about 6 minutes. The real James Fitzgerald is in them and talks about criminal profiling, Who the real Unabomber was and deciphering the manifesto. I wish there was a lot more in the extras but there wasn’t and it was a missed opportunity.

Manhunt: Unabomber was a nice surprise and entertaining. The cast is decent and the story is what makes it watchable. I hope they continue to do these mini-series about manhunts and most wanted men in the country/ world.

Features:
Criminal Profiling
Who Is The Unabomber
Deciphering The Manifesto
Trailer

Bottom Line: A very good mini-series about The Unabomber and how he was capture
Running Time: 340 mins
Rating: NR
Extras Rating:
Overall Rating: