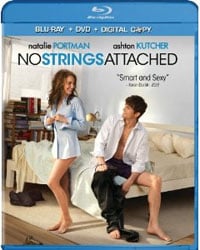 Emma (Natalie Portman) and Adam (Ashton Kutcher) are two friends who keep running into each other throughout their lives. Emma works at a hospital and Adam works as a writer for a high school musical type of TV show. Once Adam tries to get back on the horse after learning his Dad is seeing his ex-girlfriend, he calls every number in his phone. He wakes up the next day in Emma’s apartment, but not knowing what happened the night before. The two end up having sex (again?). They decide that there should be no strings attached to their relationship and just have sex with no emotional attachment to each other. They agree to do that in the beginning, but obviously things start to become more serious, which freaks out Emma since she doesn’t believe in love.

For whatever reason, No Strings Attached just didn’t work for me. It has it’s funny lines or moments sporadically, but there’s something ultimately missing from this romantic comedy. I honestly couldn’t really care about either character, but Natalie Portman’s character just seems like bitch. I personally wouldn’t be able to handle the “friends with benefits” thing, and you can see that these characters couldn’t either. It makes the movie awkward and uncomfortable at times. At certain points in the movie, I felt like I wasn’t watching a comedy anymore.

Believe it or not, I’d rather watch a movie starring Kevin Kline as his No Strings Attached character, trying to date his son’s ex-girlfriend. That happens in the movie, it just would have been funnier if the movie centered around his character. There’s more opportunity for jokes and funny situations than what happened in the movie. By the way, it was nice to see Kline back in movies since he’s been on the down low the last few years. Ashton Kutcher played a likable character, I just didn’t like Natalie Portman’s character. It kind of reminded me of Zooey Deschanel’s character in (500) Days of Summer. She’s cute, adorable, likable when she can be, but is a selfish bitch who strings a guy along. Although, she’s not as bad as Zooey’s character since she eventually sees her fault.

The Blu-Ray/DVD Combo has a few bonus features like deleted scenes, featurettes, and audio commentary. Sex Friends: Getting Together talks about the premise, can two friends keep feelings aside and just be fuck buddies. It’s got some good stuff in there and is about 20 minutes long. Inside The Sassy Halls of Secret High is a featurette about the spoof of high school musical that’s in the movie. The latest trend in romantic comedy extras is the cast talking about what makes a relationship and what not to do, and this one is no different. You can see that in Modern Love: the Do’s and Don’ts. All in all, the extras are good. If you want to watch them, getting the Blu-Ray is the obvious choice. I’m not entirely sure what’s on the DVD since I just checked out the Blu-Ray.

No Strings Attached could have been a lot funnier. The cast isn’t really the problem, but the characters themselves. The story makes me not care about them and what happens to them. Maybe others feel differently about the romantic comedy but think this could have been better.

Features:
Deleted Scenes
Sex Friends: Getting Together
Inside The Sassy Halls of Secret High
Modern Love: The Do’s and Don’ts
Commentary by Ivan Reitman and More!