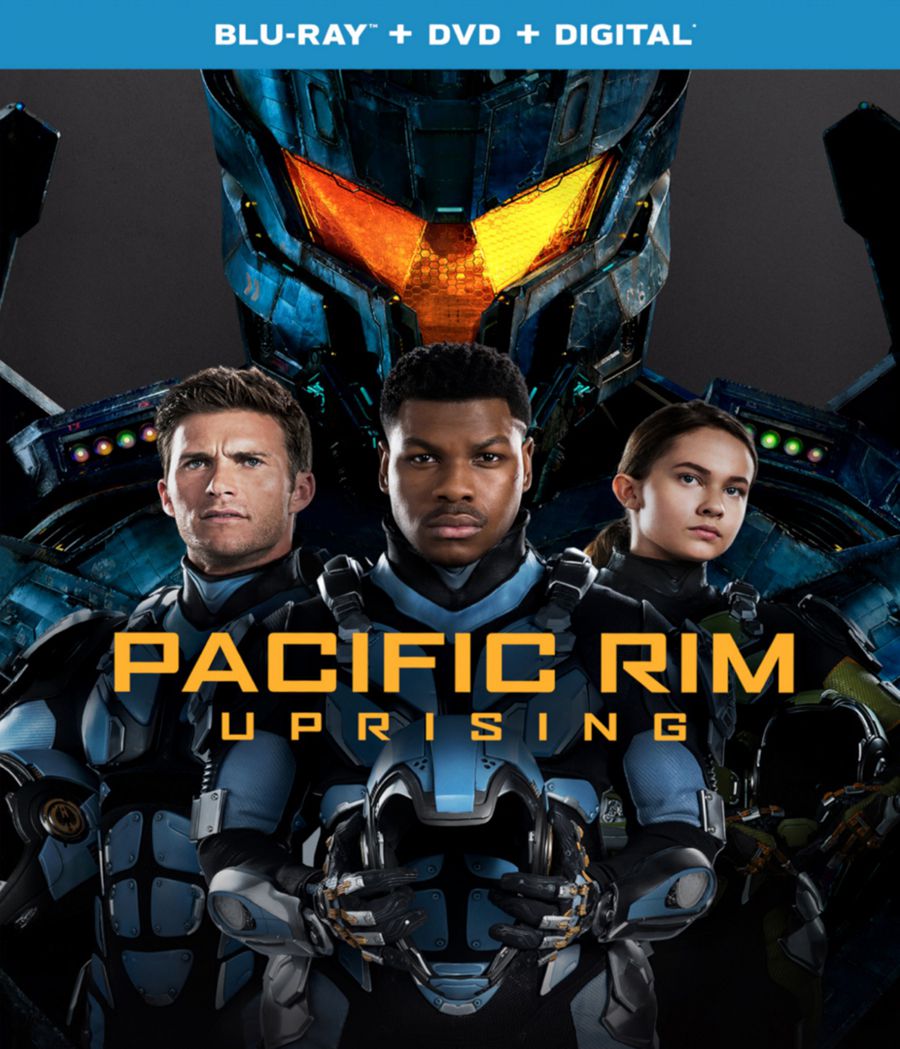 After the defeat of the kaiju and the closure of the rift, humanity has found peace…but that peace is short-lived as a new form of kaiju emerges to wreak havoc on the earth. Now, 15 years later a group of ragtag Jaeger pilots, led by Jake Pentecost (John Boyega), son of Earth hero Stacker Pentecost, stand as humanity’s only hope.

The first “Pacific Rim” movie was an unexpected hit. Looking back on it one would think that a movie with giant robots fighting giant monsters would be a surefire hit in modern movie culture but the fact that so many made-for-TV SyFy Channel movies of the same nature flooded the market with godawful tales of giant croco-sharks versus colossal anaconda beaver-squids. Giant monster and robot fans were afraid to be hurt once again but a strange thing happened…word of mouth spread and people started to flood to the theaters and the home releases were scooped up faster than a kraken-dolphin beast scoops up a ferry full of Japanese tourists. “Pacific Rim” had a great cast of characters, the script was the right mix of fun and serious all the while not taking itself too seriously. “Pacific Rim Uprising” falls short of the first movie in most ways including a lackluster cast as well as quite a few shortcomings with the script.

It’s difficult to pinpoint exactly what makes “Pacific Rim Uprising” so disappointing since it is still a movie about giant robots vs giant monsters for the fate of humanity. The first movie showed that there is an audience for this type of film and that it can be done well but there as lay one of the problems evident with “Uprising”…it tries too hard to be the first movie. There are moments when certain scenes feel as if we’ve seen them before but now with fresh shiny new actors and actresses. The plot plods through a bunch of technical mumbo jumbo quite a few times as to remind you that the writers are smart and witty with science-y things while the actors try their best to do justice to a boring script. Without Guillermo del Toro, the “Pacific Rim” franchise seems to have lost its heart and soul.

It wasn’t all doom-and-gloom for “Pacific Rim Uprising” as there were quite a few decent movie moments and some fun laughs to be had throughout. Burn Gorman and Charlie Day made the best of the script with their humorous banter and synergy between each other and I enjoyed both John Boyega and Clint Eastwood’s effort in the movie. The Jaegers looked awesome and had some unique character designs once again. Unfortunately, until close to the end of the movie, the kaiju were disappointing for the most part. For an original property ripe for merchandising it was a big fail in regards to cool and unique monster designs for various products.

For “Pacific Rim Uprising”, riding on the coattails of a movie franchise created by an incredibly talented and creative individual in Guillermo del Toro and only including him in as an “honorary producer” role wasn’t enough to put the franchise over with the fans with this sequel. While it’s always good to see the monsters vs robots trope on the big screen, fans nowadays want to see more than just that. They want a story to invest in, characters to care about and some forward-thinking science fiction action…not just another “Transformers” clone with big explosions and a lot of motion blur. There are some fun movie moments to be had in “Pacific Rim Uprising” but fans of the first movie will more than likely see the end of a promising franchise wrapping up by its end, and that’s just sad and depressing to think about. You can’t have talks of an expanded universe when no one is talking about your movie.

Bottom Line: “Pacific Rim Uprising” is everything that fans were hoping that the first movie wouldn’t be. The plot was hard to follow at times, the actors were hit and miss and the battles between the kaiju and the Jaegers were disappointing to say the least. Here’s hoping that Universal/Legendary allows someone else to steer the franchise in another direction for at least one more film…hopefully more.