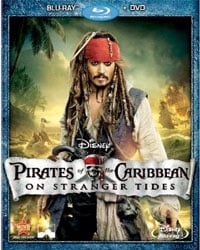 The fourth installment of Pirates is entertaining, and it’s good to see Captain Jack Sparrow on the screen again…but something seems missing from the movie. Not sure what it is.

The last time we left off with At World’s End, Jack Sparrow (Johnny Depp) was thinking about going after the Fountain of Youth with Gibbs (Kevin McNally). With On Stranger Tides, Jack tries to rescue Gibbs from the London courts, but is caught and brought to King George I. The King wants him to be a guide for the Navy in finding the Fountain of Youth before the Spanish get to it first. Leading the expedition for the British Navy is Captain Hector Barbossa (Geoffrey Rush), who is now a privateer with the British Navy after losing his leg and the Black Pearl to Blackbeard (Ian McShane). Jack manages to escape the British and runs into his Father who warns him that someone is pretending to be him and also warns him of the Fountain of Youth’s tests. That impostor is Angelica (Penélope Cruz), a former love of Jack’s and the daughter of Blackbeard. Jack is brought on board the Queen Anne’s Revenge and has to contend with finding the Fountain of Youth for Blackbeard and The British Navy while trying not to get killed (as usual)….and oh yeah, there’s zombie pirates and mermaids this time.

Pirates 4 is a fun flick but something is missing. It’s great to see Johnny Depp and Geoffry Rush ham it up again but in the end, the story feels weak I think. I don’t think I miss Orlando Bloom or Keira Knightley’s characters, but maybe some of the secondary pirates like Pintel, Ragetti, Cotton and Marty. Even the British soldiers that turned pirates at the end of At World’s End would have been great to see again. Maybe there’s hope if there’s another Pirates after this? It was cool to see Keith Richards cameo as Captain Teague. He had one of the funnier lines in the movie, which I missed the first time because he talks so low in the movie. I am thankful that Geoffry Rush was back in the movie, because I simply love his character. The way he shouts orders and the way he looks, he’s just the perfect pirate. Sure, everybody loves Johnny Depp but it’s Rush who really shows us what it’s like to be a real pirate. Well, one in the movies anyway. He’s got the peg leg now too!

Penelope Cruz’s character was okay and I liked that Jack met his match with her. I believe she was preggo when filming this (you can tell in the chest & face haha), and was impressed that she still managed to do the movie. I’d like to see her character further developed next time, which there has to be since she found Jack’s voodoo doll at the end of the credits. I also didn’t mind the storyline of the clergyman and the mermaid. For one, the mermaid played by Àstrid Bergès-Frisbey is just a cutie pie. So I wouldn’t mind seeing more of her if there were sequels. But honestly, I don’t know what else they could do with those two characters since it almost seemed like they closed their storyline arc at the end.

Acting aside, the effects for the most part, weren’t that bad and held up nicely on Blu-Ray. There weren’t as many effect shots in this movie but I didn’t mind that. Rob Marshall took over the reins from Gore Verbinski and did a great job I thought. I couldn’t really find too much that was wrong with his direction. I would have had more of Blackbeard in the movie, as well as Gibbs. 40 minutes go by and we haven’t even been introduced to the character yet. Something is slightly wrong when you don’t even care too much about the supposed villain of the movie.

The Blu-Ray and DVD combo set got ripped off with the special features. If you get the 3D edition, there’s a whole other disc of extras but this one only gets audio commentary, some bloopers, some Lego animated shorts featuring Lego Jack Sparrow. that’s basically it. If extras aren’t your thing, then this Blu-Ray is the one to get if not get the 3D Blu-Ray.