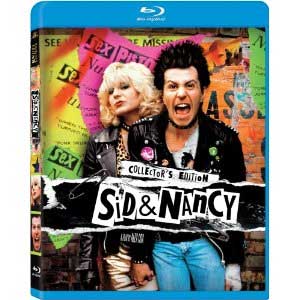 Sid & Nancy is considered a punk rock classic. It’s a good anti-drug movie too and shows what a trainwreck life Sid and Nancy had together. It’s probably not the most faithful biopics ever but it will give you a general idea on how things went down.

The movie is about the life of Sex Pistols’ bassist Sid Vicious (Gary Oldman) and his junkie girlfriend Nancy Spungen (Chloe Webb). At first, Sid doesn’t think much of Nancy but things change when she introduces him to heroin. Soon the couple get serious, and worse with drugs as well. The Sex Pistols break up during a tour in the US because of Sid’s drug abuse. The junkie couple decide to spend time in New York City, and try to launch a solo career for Sid, which doesn’t turn out so well. Life spins out of control for the couple soon after.

Believe it or not, this is actually very first time seeing Sid & Nancy from start to finish. I’ve seen parts here and there but not from beginning to end. It’s a good movie but I don’t think deserves repeat viewings. At least that’s how I feel. I’ve seen parts of Alex Cox’s other cult movie Straight To Hell featuring a lot of the same actors from this movie, as well as The Pogues. The Pogues provided a lot of the music for this movie, as well as Joe Strummer and Pray For Rain. Not all of the Pogues’ songs were featured on the soundtrack though, like “Hot Dog For Everything.” I always like that speed punk song sung by Spider.

As far as the movie is concerned, Sid & Nancy is a good example why I don’t even go near drugs. Just goes to show you what can happen when you have drugs take over your life. It was actually tough to watch this movie sometimes because you can just see what was going to happen a mile away…even though I knew the outcome from the start. Gary Oldman did an awesome job as Sid Vicious, but can’t say the same for Chloe Webb. I fucking can’t stand that actress and she really ruins the movie for me. She’s beyond annoying with her obnoxious accent, and screaming throughout the movie.

I didn’t really get the ending of the movie though. So was he tripping out that Nancy was still there in the cab? I didn’t get it. I thought it was pretty cool to see my current hometown of downtown Jersey City in the shots at the end of the movie though. There’s an eerie shot of Sid walking in front of the World Trade Centers with clouds surrounding the buildings. When the cab drives off, that’s the Powerhouse and it’s remarkable how much the area has changed since the empty, poverty stricken streets looked in the movie.

I tried to see what extras were on here, but for some reason my Blu-Ray player wouldn’t get to the main menu. The movie started right up for me and when I tried to hit menu, it would start movie the movie over. Not sure that’s happening on all discs or just mine? The movie looked great on Blu-Ray by the way!

If you haven’t seen Sid & Nancy before, don’t expect to get a documentary biography about the legendary member of the Sex Pistols. The movie is good but not one I would want to watch over and over.

Features:
For The Love Of Punk
Junk Love
Theatrical Trailer