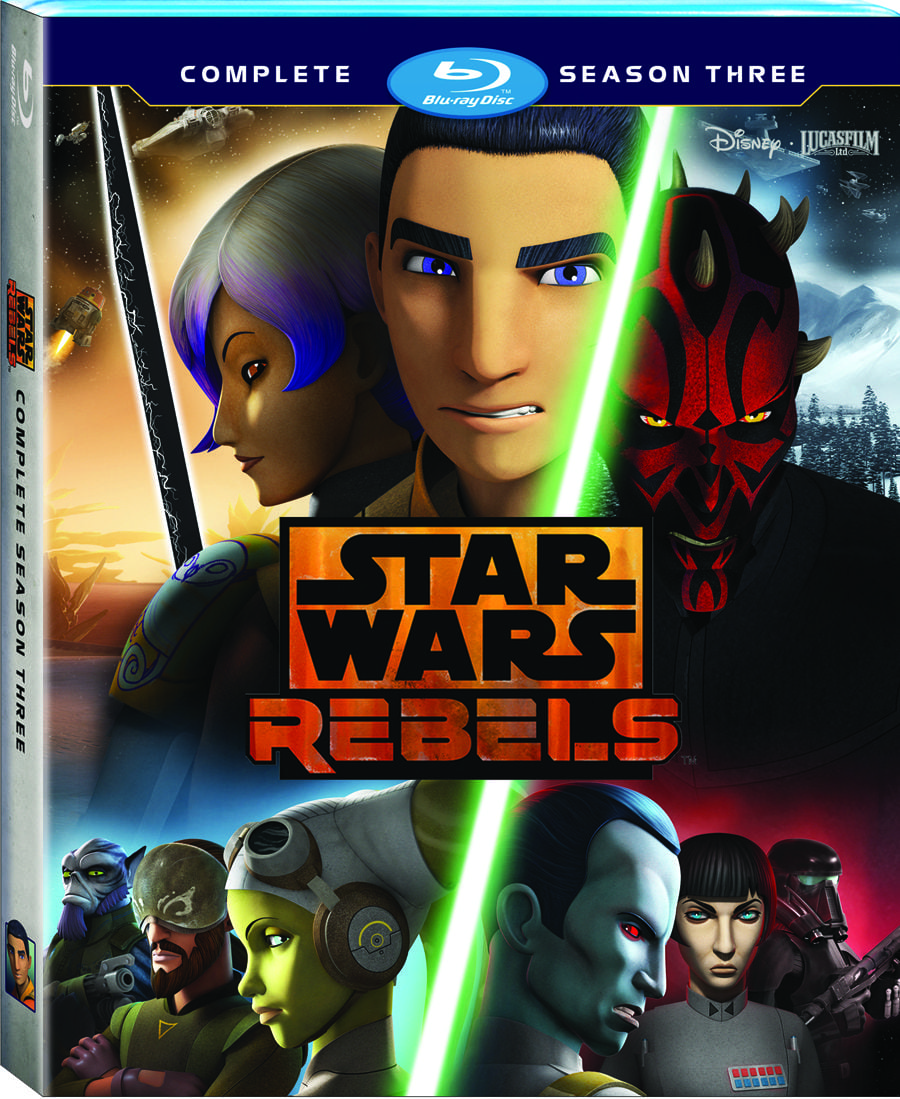 The “Rebels” crew is back fighting the good fight once again with 22 more excellent episodes of “Star Wars Rebels: The Complete Season Three”.

Picking up six months after the end of season 2, the rebels are growing in number as more and more skilled fighters, pilots and workers are defecting from the Empire and the worlds under its grasp. Now the rebels aren’t just a nuisance…they’re a serious threat and the Empire has taken notice. With this we are introduced to a character that escaped the canon crunch and is considered a “legacy” character in Star Wars lore…that being Grand Admiral Thrawn. With a near-genius level mind for war and strategy, he proves to be more than a match for Ezra and crew and has a great story-arc that covers most of the third season. He is always ten steps ahead of them and seems to be enjoying the game of cat and mouse a little too much as he is constantly setting up the rebels and toying with them in one way or another.

Maul, who played a major role is season two is back with an even more important role is season three. He is searching for one thing and one thing only and he won’t stop until he finds the location of what he seeks and what he seeks is none other than Obi-Wan Kenobi. This leads to the final duel between the two arch-enemies that is worthy of any Star Wars battle to date.

While there are plenty of plotlines and stories taking place involving Maul, Thrawn and a few other new/old characters like Wedge Antilles and Hondo Ohnaka, the Rebels crew is not overlooked. Season 3 has some of my favorite episodes of the series so far. Kanan finds peace with his blindness and discovers a force-wielder whom is not “good” or “evil”, Ezra gains confidence and the trust of his friends and allies as he works his way up the ranks, we discover more of Hera’s past and her heritage…but my favorite character Sabine gets to shine quite often. Probably the best episode of season three for me was “Trials of the Darksaber”. In it Sabine must discover how to wield an ancient Mandalorian weapon that is both a symbol of her people and a rite of passage for herself. Kanan decides to train Sabine who is obviously not a force-wielder but it’s more an episode of self-discovery and dealing with the past and coming to terms with what happened to her when the Empire took over her people. There is a great message of friendship and family as the entire Rebels crew reveal to Sabine that they will stick with her whether she decides to lead her people or not. It’s definitely a tearjerker moment.

With it already announced that season 4 will be the final season of “Star Wars Rebels”, season three ties some things together and manages to set up some plotlines for season 4. With the rebels growing in numbers and in threat level, I’m curious to see their story come to a conclusion. Obviously, none of them appear in the original trilogy so do they go the way of Rogue One and sacrifice themselves for the greater good or does Disney have plans to bring them to the movie-going audience on the big screen? Only time will tell but until then, “Star Wars Rebels: The Complete Season 3” has more than enough to entertain you until then.

If you haven’t been following “Star Wars Rebels” then you are missing out on one of the most important shows in Star Wars lore. The characters have grown and developed since the first season and they have also brought fun and interesting backstories to characters that wouldn’t get much screen time on the silver screen. It doesn’t shy away from the realities of war and its consequences but it is also suitable for a younger audience that would watch it with their parents. Just try not to break any lamps and coffee tables with your lightsaber duels!

Bottom Line: Season 2 of “Star Wars Rebels” is soooo good that it’s makes it hard to follow up, but while season 3 starts off slow it has some great episodes and ends strong with the last third of the season being nothing but amazing episodes.
Running Time: 485 Mins
Rating: TV Y7
Extras Rating:
Overall Rating: