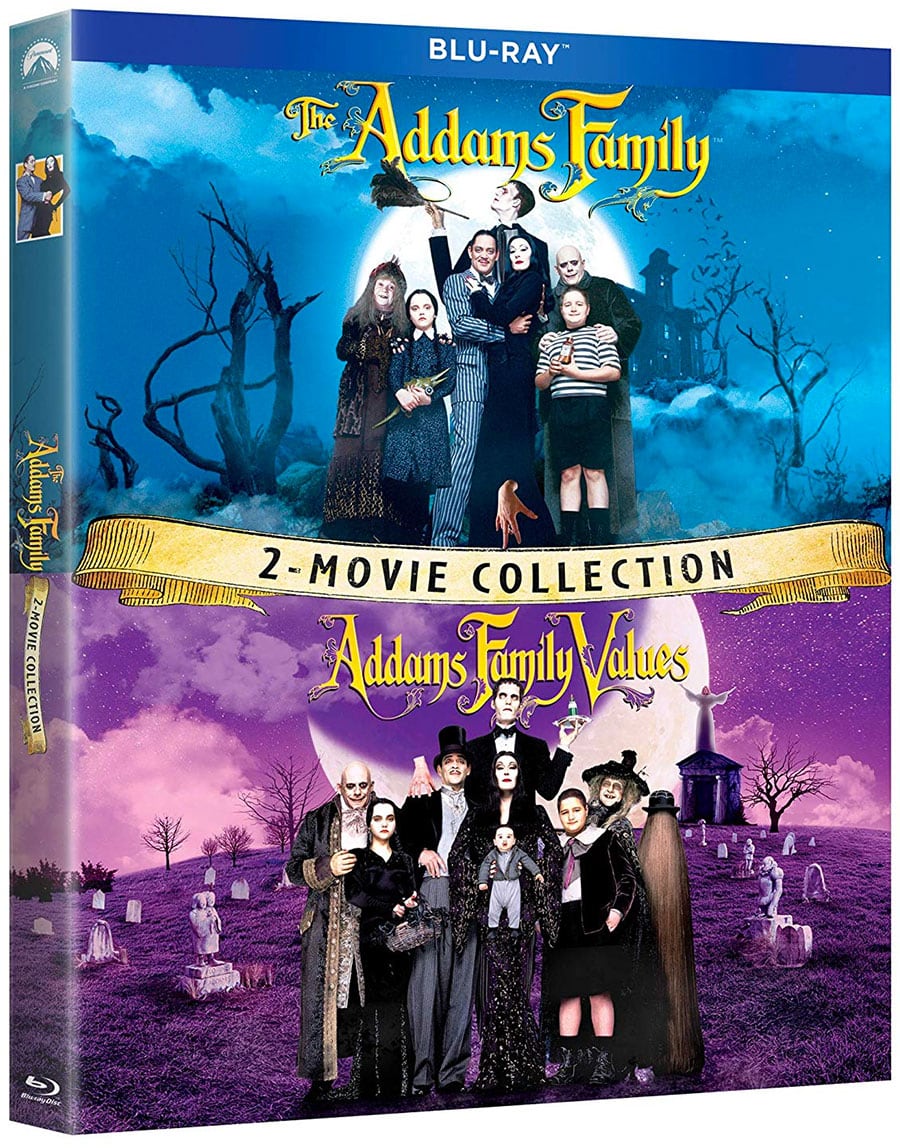 Addams Family and Addams Family Values are both Halloween staples in my house and they must be watched every year. I think they are brilliantly underrated and very funny movies. I actually enjoyed the sequel more but everytime I watch these movies, I find new things to laugh at. Now they are available on Blu-Ray as a combo package.

The Addams Family movie version is about the dark & quirky Addams family, when long-lost Uncle Fester (Christopher Lloyd) reappears after 25 years of being at the Bermuda Triangle. Gomez (Raul Julia) and Morticia Addams (Anjelica Huston) are excited that he’s back but their kids Wednesday (Christina Ricci) and Pugsley (Jimmy Workman) are suspicious it’s really him.

Addams Family Values is about Gomez and Morticia having a baby and Uncle Fester being lonely. Wednesday and Pugsley start trying to find ways to get rid of the baby so the Addams bring in a nanny, Debbie (Joan Cusack). She begins pretending to fall for Fester so she can get the family fortune and kill Fester, like the last few husbands she had. Debbie suggests sending the kids to a summer camp to get them out of the way since they suspect she is up to no good.

Addams Family is such a good movie to watch, especially around Halloween time. Not sure what Paramount was thinking in not releasing this before Halloween originally. I think it was released in November, and I believe I saw both movies in theaters as well. Addams Family has some hysterical lines and scenes in it, and quite amusing with dark humor. Loved the play scene where the kids are spraying blood all over the audience. Very Monty Python-eque. I was never crazy about the Fester having amnesia plotline but the rest of the stuff I liked. In the end, the story works out. One thing I always missed about these movies was Cousin It not being more involved. I barely remember watching the TV series but thought Grandmama and Cousin IT were on the show more.

Barry Sonnenfeld’s direction was great and had that nice blend dark humor, comedy and even a little bit of tame horror in there as well. Reading the wikipedia page, it seemed he had a lot of stress directing the movies but seemed like he did alright in the end. Tim Burton passed on the movie for some reason, but seems Sonnenfeld channel Burton a little bit with his take on the Addams Family. I always thought that, even when seeing the movie originally.

With Addams Family Values, I actually think this is the better movie and definitely under-appreciated. I find myself laughing more and more at this one than the original. All the stuff with the baby was hilarious, with the kid coming out of the womb with a mustache. I still giggle my ass off when he’s flying into the air at the end and shows up at the airplane window. When Wednesday and Pugsley get sent off to camp, those are some of the funniest scenes of the two movies. Peter MacNicol and Christine Baranski as the owners of Camp Chippewa were brilliant and definitely scene stealers for me. Sadly, Raul Julia wasn’t doing good during the filming of this one and passed away a year after this was released. I thought he was the perfect Gomez though. Many of the one-liners that I always find so funny were from him. Both movies are just the perfect blend of goth, horror, dark humor and comedy and don’t think get enough appreciation.

I never bothered to see that straight to video Addams Family sequel since there were no original cast members in it except the actor who played Lurch. Not sure how the animated movie will be but I’m intrigued enough to see it when it comes out on video. I kind of wish they just rebooted this franchise (live version) because I think it’s worthy of that. At least I have these two movies that I thoroughly enjoy so much, that I have to watch them every October for Halloween.