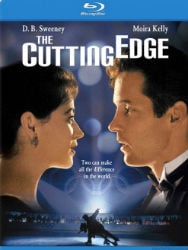 The Cutting Edge, yes that Cutting Edge film, is a film about a washed up hockey player and a snotty rich kid who is a figure skater and team up as an unlikely duo to compete in the Winter Olympics. Starring D.B. Sweeney as Doug Dorsey and Moira Kelly as Kate Moseley, this pair really became known in the film industry for this film. Not just your romantic “comedy” type of movie, but features some great work with Hockey and Figure Skating as the camera work was quite impressive. Not to mention it is one of my wife’s favorite films so you know how it goes.

The film opens with Doug Dorsey late for his big Olympic hockey game as he is bedding a local, and in that game he finally arrives for, suffers a career ending injury. After many attempts at trying to get a NHL contract, all options have closed. Well except one. While Doug is finding out his career is likely over, Kate Moseley is having a rough go of it as well. She can’t gel with any other partners after her debacle at the Olympics when her now former partner dropped her on the ice in front of the whole world. Her skating instructor, Anton Pamchenko, seeks out on his own recognizance to invite Doug Dorsey to their mansion to skate. With some reluctance on both parts they agree to give it a shot. The competitor that Doug is, refuses to let Kate push him around and is the first person that really gives it back. Eventually things finally click and the long shot duo make their way to the Winter Olympics and try and steal gold as well as fall in love with each other.

Not much as far as extras goes. It had a nice 10 minute featurette on the look back at the Making of the Cutting Edge. Both actors explain that they didn’t really skate that much prior to filming but with 3 months of practice they clicked on and off the ice, developing a great chemistry that the film needed. Both lived in NY so it helped that they got to get to know each other so they were ready to go on the ice when the time came. It was also very weird to see Terry O’Quinn in this, with hair and a little Billy Dee Williams mustache. I can only picture John Locke from Lost now so it was weird to go back and see him younger, playing Kate’s father. Directed by Paul M Glaser as some might remember from the original Starsky & Hutch. Glaser did a great job, as the featurette showed, of capturing the actor’s faces in a lot of the shots on the ice. It’s hard to do when any sports film is shot but they used a cool spinning contraption to swivel and get the action on the ice. The film didn’t look half bad in HD as it was almost 20 years old with the typical film grain for a movie back then. The extras weren’t in HD but for this release, you are getting this for the film.

Bottom Line: I really liked this film, though some might not care to admit that, features great acting and an exciting storyline
Running Time: 101 mins
Rating: PG
Extras Rating:
Overall Rating: