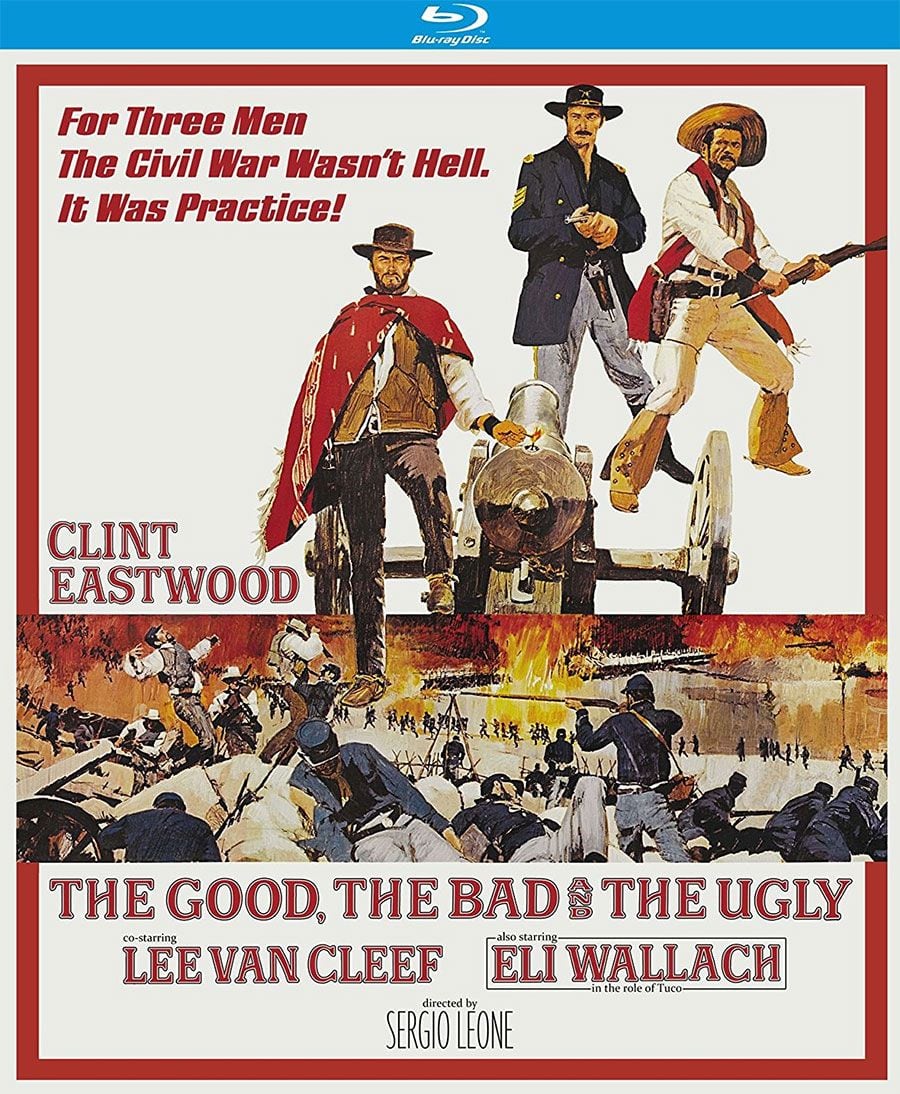 The spaghetti western classic The Good, The Bad and the Ugly is celebrating 50 years and Kino Lorber has released a new 4k transfer of the theatrical and extended cut of the movie on Blu-Ray to celebrate!

For those that don’t know, the movie is about 3 men in search of some confederate gold during the Civil War. There’s a quiet bounty hunter called “Blondie” (Clint Eastwood), there’s evil mercenary Angel Eyes (Lee Van Cleef) and then there’s Tuco (Eli Wallach), a Mexican outlaw. The three men’s paths cross here and there as they race to get to the money first. They won’t even let a simple Civil War stand in their way of getting paid.

It’s been awhile since seeing The Good, The Bad and The Ugly. Probably since the last time it was released on DVD by MGM, back in 2011. I’ve only seen the movie about 3 times now but each time it gets better and better for me. I still feel like For A Few Dollars More is a better movie because this movie is a little long. With all the Leone movies, it’s overdubbed so it does take some getting used to each time. I feel like this one isn’t as bad as the other two in terms of dubbing. For the most part, the dialogue syncs up with the mouths even though everyone is speaking a different language. Of course, my favorite parts of the movie is the “Ecstasy of Gold” sequence with Tuco running around in the cemetery, and the trio duel at the end. Just so good and drawn out – like when are they going to draw! I honestly don’t think the movie would have been as good if it wasn’t for the score from Morricone though.

The Blu-Ray features a lot of extras, a lot of them that were on other releases since many of them aren’t Blu-Ray quality. I don’t remember or haven’t seen a lot of these so I watched some of them. The making of documentary was interesting and about 20 minutes long. It was old since it had the late Eli Wallach in there. People talk about Leone filming style, and how it was edited for multiple languages. Some actors would have to speak their lines, wait a few seconds, and then speak their lines in their language. I don’t think I could put up with an overdubbed movie nowadays but back then, it was a norm. The other extras I watched were on Ennio Morricone’s brilliant score. The experts discuss how so many people ripped off that sound afterwards, how it was so unique and different to use a coyote howl in there and other things like that. Plus, he wrote a lot of the score before seeing anything on screen. It’s interesting if you’re a big film score buff like myself.

The Good, the Bad and the Ugly is a classic western and needs to be seen at least once. While I still like For A Few Dollars More…more, this one is a close second but that’s just my opinion. Others will say this is by far the best one and they are entitled to that opinion. This movie, especially the extended cut is way too long. I guess if you don’t want to watch the extended cut, you have the option to watch the theatrical as well. If you already own a Blu-Ray of the movie, not sure it’s worth the upgrade or not.