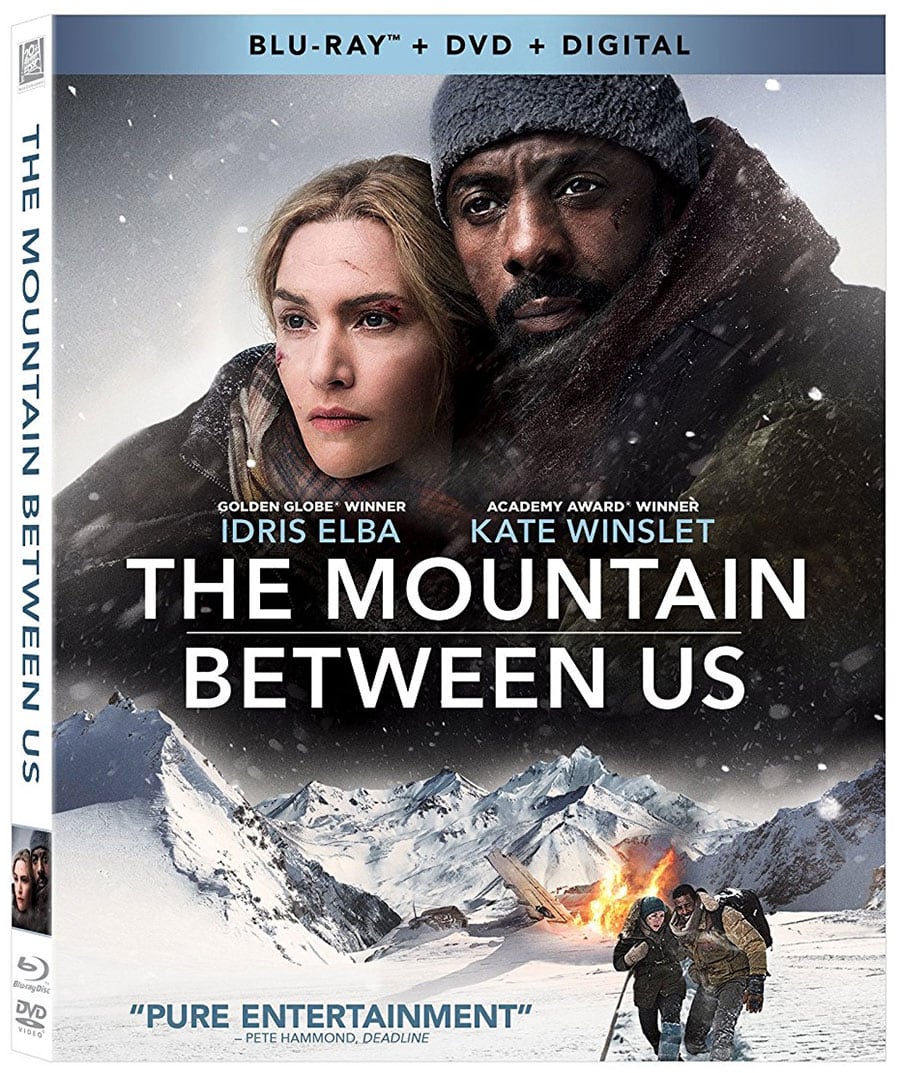 I like a good old fashioned plane crash movie. Just don’t show them on the plane when I’m flying. This one features two people who fall in love with each other in the snowy mountains. I think everybody is forgetting Cast Away with Tom Hanks and Wilson!

The movie is based on the Charles Martin novel and it’s about two strangers getting a charter plane in Boise to beat a snow storm. Ben (Idris Elba) is a neurosurgeon and Alex (Kate Winslet) is a photojournalist rushing to make her wedding day. The pilot of the plane suffers a stroke and the plane crashes into the mountains. Ben, Alex and the pilot’s dog all survive the plane crash but Alex is badly injured. With most plane crash stories, no help arrives and they must trek into the snowy elements in order to survive.

I like movies like Alive and Cast Away so I was generally interested in seeing this. It didn’t get the greatest reviews but I still kept an open mind. I can see why it got some mixed reviews but I overall liked The Mountain Between Us. Idris Elba and Kate Winslet were great and played off well. The characters themselves don’t exactly mesh well for a lot of it so I thought the whole love story felt forced. I guess I could see why they fell for each other, under the extreme conditions and thinking they would be the last people they ever saw. Still, it felt forced and not natural. The ending is a little bit too Hollywood as well. At least with a movie like La La Land, as much as it sucked, they didn’t end up with each other. I can definitely see Ben and Alex being with each other for a little bit before releasing the only thing they have in common was this one big event in their lives. That would be a depressing sequel.

I liked that the movie actually filmed in these locations and wasn’t too much CGI. You can tell it’s freakin’ cold out based on just the locations. I would have liked if the movie focused on just two strangers trying to survive out in the wilderness with whatever they can find. I always liked those MacGyver episodes the best. The whole love story was just meh to me. Once they are rescued, there’s still half hour left to resolve the story and you realize this is really just a romance drama. Some people will hate that, other people won’t mind it.

The extras include featurette on the chemistry between the two actors, shooting in the snowy locations, the stunts the actors had to do, some deleted scenes and more. It was nice seeing the featurette on the locations because despite being really dangerous, the mountain scape was beautiful. They had to either helicopter in or had a base camp nearby they had to go to. Some days they couldn’t do certain filming because the weather conditions were too extreme. There’s almost 15 minutes of deleted scenes; some of them good. I could see why most of them were cut though. There’s a decent amount of extras to watch after seeing the movie.

The Mountain Between Us would have been better if it was just a survival story and not a survival love story. The love story portion of the movie felt forced and not really believable. Two characters didn’t really bond that well and bickered a lot. Sounds like a match made in heaven, and then 2 years later match made straight to go to divorce court. All that aside, I still didn’t mind the movie and enjoyed watching it. Not sure if I would watch again, at least not anytime soon.