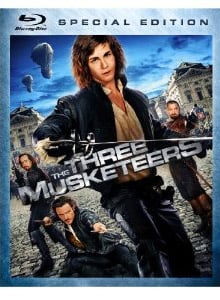 It’s pretty bad that my favorite Musketeer movie is still the one that stars Chris O’Donnell, Charlie Sheen and Kiefer Sutherland. The updated Three Musketeers had the potential to stand out from the other mediocre movies about the Musketeers, but all it does add to the other fodder.

Most of you already know what the Three Musketeers is about but I’ll add give a quick synopsis of the movie. The young, arrogant D’Artagnan (Logan Lerman) teams up with the famous French Musketeers, Athos (Matthew Macfadyen), Porthos (Ray Stevenson), and Aramis (Luke Evans) to battle the Duke of Buckingham (Orland Bloom) and Milady de Winter (Milla Jovovich). There’s conspiracy, sword fighting, bad dialogue and unnecessary flying ships.

Based on the trailers, The Three Musketeers looked like it might be fun. Then I watched the movie and then I thought otherwise. For the most part, the cast was good but nothing they could have done when the script is awful. Just the way this movie was done is just pure stupid. I’m still waiting for Three Musketeers movie that’s similar to the novel and one that doesn’t utterly suck ass. The Man in the Iron Mask is decent but Leonardo and John Malkovich had to ruin it with their bad acting. The Musketeer in 2001 was hilariously bad as well. The Disney movie that came out in the 90s is the one I enjoy the most believe it or not. But even that leaves a lot to be desired.

But with most movies about D’Artagnan, they can’t seem to find actors that all speak the same. Accent inconsistencies drive me crazy, and this movie is no different. You have most actors speaking British, D’Artagnan speaking American; then there’s bad guys with a Danish & German accents. How about finding French actors for a change, since you know, this movie is about the FRENCH musketeers! I’d love to see a realistic musketeer movie that follows the novel, pays attention to French history and one that doesn’t have such a laughable script.

So accents aside, about the only thing I enjoyed out of this was the one sword fighting scene with the Musketeers and D’Artagnan vs the Cardinal guards. Other than that, there’s nothing else to really like. I don’t think the actors are to blame for this, in fact I’d love to see more stuff from Luke Evans (gonna be Bard the Bowman in the Hobbit!), and Matthew Macfadyen. I always liked Ray Stevenson since Rome so I don’t mind him as an actor. The same with Christoph Waltz, even though he seems to be taking any gig since winning an Oscar.

I should have known that this movie would have been an over-the-top mess since Paul W.S. Anderson was at the helm. So you’d imagine the type of stuff you’d see in this: unnecessary slow-mo fight scenes, bad CGI, and awful dialogue. Plus, what the hell was up with the flying ships? It’s one thing to see that in a fun, fantasy movie like Stardust (that’s a movie that gets it right!), but to have flying ships in a musketeer movie? Fucking stupid! I just shook my head and wanted to turn the movie off at that point.

The Blu-Ray offers only audio commentary, an access to interviews, some featurettes and deleted scenes. Nothing really that spectacular, just like the movie. Fans of swashbuckling movies and Three Musketeers movies will be disappointed by this pile of over-the-top crap. Bad dialogue, stupid slow-mo action scenes and it’s just a bad movie which is a shame since the majority of the cast is decent (besides Logan Lerman and Milla Jovovich).